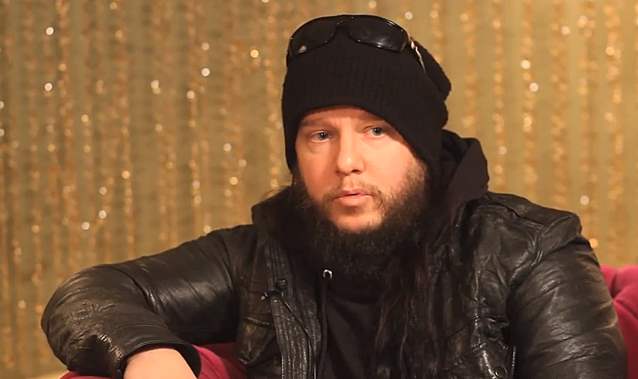 SLIPKNOT and SCAR THE MARTYR drummer Joey Jordison was interviewed on the August 30 – September 1 edition of Full Metal Jackie's nationally syndicated radio show. You can now listen to the chat using the audio player below.

To see a full list of stations carrying the program and when it airs, go to FullMetalJackieRadio.com.

Full Metal Jackie: You're constantly playing in different bands and musical projects. Is it simply passion, or does compulsive-obsession better describe your 24-7 immersion in music?

Joey: I think both do. It is passion and it is an addiction. The thing about doing [SCAR THE MARTYR] is, with SLIPKNOT's time off, I was compiling so many songs that I had so much material. I just wanted to see what else I can do, and I just stayed in the studio. So, I just started compiling a bunch of songs that didn't really have a home, until I decided to start thinking about who I'd like to have play and perform on the stuff, and that's when I started thinking about making it a full-time thing.

Full Metal Jackie: Joey, as the songs developed, what became most important for you to do with SCAR THE MARTYR that you haven't done with any other band or project?

Joey: That's a good question. I wanted to know and work on the different influences I've had from the post-punk movement, and meshing that with a lot of droning tones as well that I've never experimented with. I wanted it to be really hypnotic, but in a vocal sense, I wanted it to have a lot of melody, especially chorus. I wanted to encompass all the heavy stuff too, but I wanted it sounding completely unique. So, when I was looking for vocalists, a friend of mine recommended Henry Derek, and I sent him "Blood Host", "Dark Ages", "Soul Disintegration", "Never Forgive Never Forget", "Last Night On Earth" — those are a few of the titles from the record — and he instantly got them back to me. When I first heard "Dark Ages", I think that was the first song that he sent; it was everything I was looking for. It was perfect. So, from then is when I think I started taking it really seriously, because sometimes vocalists are one of the harder things to find — especially someone who sounds fresh and exciting. After that, Henry and I started exchanging songs and working on everything, I went in the studio and started the record.

Full Metal Jackie: Joey, [SCAR THE MARTYR is] going to be doing this tour through the end of August with DANZIG and HUNTRESS. Are you a Danzig fan?

Full Metal Jackie: Have you ever toured with him before?

Joey: Never have, no. We had one show in now, but we're glad to be a part of the tour. It's special because it's 25 years; [former MISFITS guitarist] Doyle is also playing with him. It's the perfect tour for us. We couldn't ask or anything better. They're treating us very well so far. It's been a great tour to be on. We're so lucky and grateful to have the opportunity to get our music out to Danzig fans. Hopefully fans of all our other projects will dig it too, from all the other guys' bands that we play in. It's a great opportunity. We're having a great time so far.

Full Metal Jackie: Rhys Fulber is highly regarded for his work with FEAR FACTORY and FRONT LINE ASSEMBLY. What do you hear in his work that made it so important that he should produce SCAR THE MARTYR?

Joey: It was a weird thing. I had a bunch of producers I was looking at. I had my choice of a lot of people. First of all, I wanted to work with someone I had never worked with before. Also, I wanted to work with someone I think would capture the sound I'm looking for. Of course I'm a FEAR FACTORY fan; I love his work. Also, he's doing the new MINDLESS SELF INDULGENCE record too, so he crosses a lot of barriers. He's very good a honing in on the drum sound I want, keeping the guitars super heavy and tight. Even with the low tuning, he really captured it perfectly. He really pushed Henry and got a great vocal performance from him. I couldn't be happier with him. Rhys did an amazing job.

Full Metal Jackie: The album won't be out until October but again; you'll be spending [August] on tour supporting DANZIG. Is there exhilaration or a rush to performing new music for an audience completely unfamiliar with it?

Joey: Yeah, it is cool. It almost pushes you harder a little bit. Right now, they're deer in headlights. What's this sound? Who are all these people? This guys from this band, it's an overload to people right now. Plus not having the record out, there's not a lot to latch on to besides "Blood Host". It was cool, after we finished the first few songs; we run a lot of songs back to back. When we had some breaks the other night, in between songs the crowd was really receptive. That's a good starting point. We're working and we're here for the long haul. So, we're proud of the record and can't wait to get it out to as many people as possible.