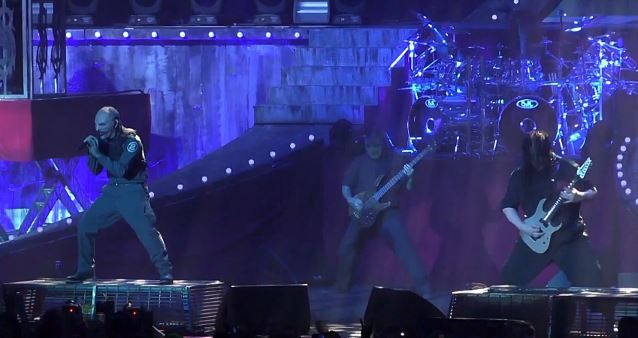 Multi-camera fan-filmed video footage of SLIPKNOT performing the song "Sarcastrophe" on February 8 in Hamburg, Germany can be seen below.

SLIPKNOT's "Summer's Last Stand" tour kicks off on July 24 in West Palm Beach, Florida, wrapping up six weeks later on September 5 in Dallas. Joining SLIPKNOT on the road trip will be LAMB OF GOD, BULLET FOR MY VALENTINE and MOTIONLESS IN WHITE.

The summer jaunt follows a brief spring run that SLIPKNOT launched on April 25 at the Fort Rock festival in Fort Myers, Florida, ending on May 16 in Grand Rapids, Michigan.

The last single released from SLIPKNOT's new album, ".5: The Gray Chapter", which came out in October, was called "Custer".

".5: The Gray Chapter" is the first new SLIPKNOT record since the 2010 death of bassist Paul Gray and the 2013 dismissal of drummer Joey Jordison.