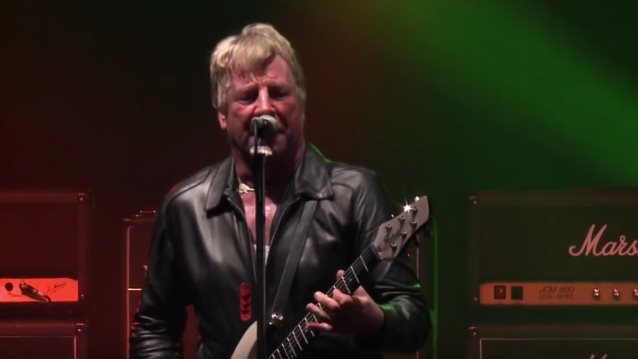 STATUS QUO manager Simon Porter has released the following extended statement regarding the passing of the band's guitarist Rick Parfitt:

"On behalf of family, band, management, crew, Rick's many friends and, not least, QUO's huge army of fans, I would like to thank everyone who has sent messages of sympathy and support today.

"It is very much appreciated and perhaps now is the time to reflect at the end of a terrible day, coming at a time when we should all be celebrating both Christmas and the end of another year.

"On a personal note, I have known Rick for over thirty years as a friend, PR and, for the past fifteen years, as QUO's manager. There have been incredible highs, numerous laughs and some extremely dark periods. It has been an absolute rollercoaster and I probably wouldn't have had it any other way.

"I really think that we all thought that Rick was invincible, given his numerous and astounding recoveries from situations which would certainly have killed the average human being. Indeed, early this morning when I initially heard the news that he had taken a serious turn, my mind instantly thought that he would come around by Boxing Day.

"Sadly, as we now know, his luck had run out and his line that 'it will take more than death to kill me' has taken a hollow ring. QUO fans should know and take comfort in the fact that his passing has, ironically, come at a time when Rick was in a happier place, career-wise, than he had been for a long, long, time.

"I had dinner with Rick in Malaga on Tuesday evening and met with him again on Wednesday morning. Although he was in pain from a shoulder injury incurred as a result of an accidental fall, he was in good spirits and extremely excited about the future. Rick had come to terms that he would be unable to tour with QUO again, but he continued to be very much part of the QUO machine and we discussed future plans for the band. More importantly, however, Rick was ecstatic and excited with the news and contracts that I was able to give him for his autobiography, a solo album and a U.K. 'evening with' tour, all scheduled to take place in May of next year.

"Sadly and less than three days later, all of our exciting plans have now gone bust in an instant.

"Rick was the ultimate rocker and lived the dream, plus a whole lot more. In perhaps the worst ever year for showbiz deaths, it is perhaps fitting that he topped the list right at the end of the year. He would have liked that…"

Parfitt died in Spain on Saturday at age 68. The guitarist passed away in a hospital in Marbella from a severe infection.