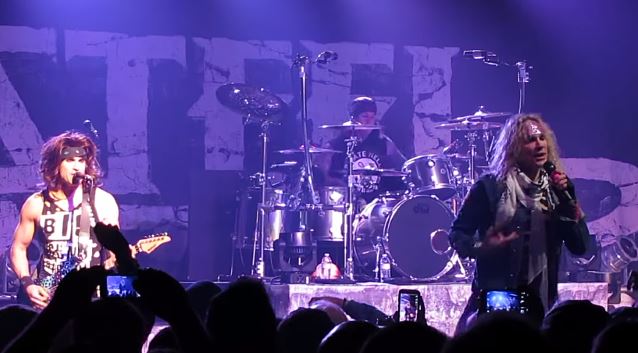 Fan-filmed video footage of STEEL PANTHER's December 17 concert at Marathon Music Works in Nashville, Tennessee can be seen below.

STEEL PANTHER has just released its first-ever original Christmas track, "The Stocking Song". Featuring STEEL PANTHER's signature hooks and naughty take on the holiday season, it is available for purchase on iTunes and on Amazon.

Having wrapped a highly successful run as main support for JUDAS PRIEST in North America in November, STEEL PANTHER is currently on a North American headlining run, which kicked off in Charlotte, North Carolina. Following the North American headlining dates, the band will be play a series of "Threesomes", two three-night residencies, one in their hometown of Los Angeles and the other in nearby Las Vegas, at the cities' respective House Of Blues venues in February.

STEEL PANTHER's third album, "All You Can Eat", sold around 13,000 copies in the United States in its first week of release to land at position No. 24 on The Billboard 200 chart. The CD arrived in stores on April 1, 2014 via Open E/KLS.