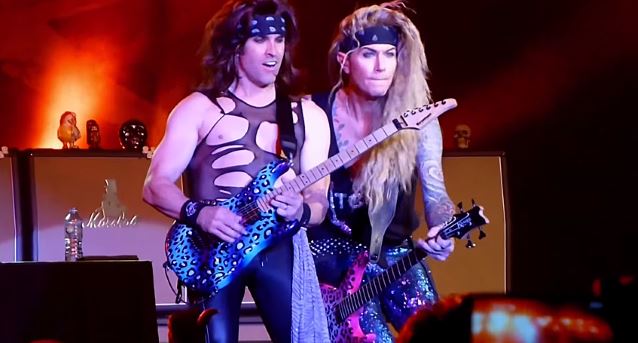 Dave "Higgo" Higgins, formerly of Australia's long-running rock station Triple M, conducted an interview with guitarist Satchel and bassist Lexxi Foxx of Los Angeles glam-metal jokesters STEEL PANTHER during this year's Soundwave festival. You can now listen to the chat in the YouTube clip below.

STEEL PANTHER in December released its first-ever original Christmas track, "The Stocking Song". Featuring STEEL PANTHER's signature hooks and naughty take on the holiday season, it is available for purchase on iTunes and on Amazon.

Having wrapped a highly successful run as main support for JUDAS PRIEST in North America in November, STEEL PANTHER played a series of "Threesomes", two three-night residencies, one in their hometown of Los Angeles and the other in nearby Las Vegas, at the cities' respective House Of Blues venues in February.

STEEL PANTHER singer Michael Starr (real name Ralph Saenz; ex-L.A. GUNS) told The Tennessean that, despite the band's cult band status, "now, with where we're at with 25 employees, trucks and buses, there's a lot riding on what comes out on our CDs. Plus, we're getting a lot of pressure to write clean stuff from people surrounding our camp, so they can make money off of what we're doing," he added. "They're like, 'Look, we need a serious record from STEEL PANTHER.' From day one, we said, 'No. We're not doing that.' "

STEEL PANTHER's third album, "All You Can Eat", sold around 13,000 copies in the United States in its first week of release to land at position No. 24 on The Billboard 200 chart. The CD arrived in stores on April 1, 2014 via Open E/KLS.