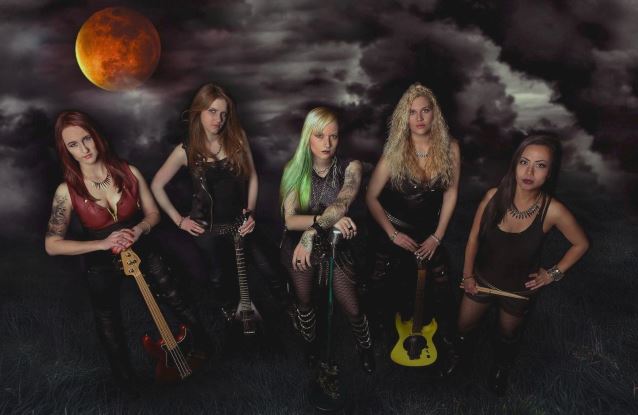 Swiss all-girl heavy metal outfit BURNING WITCHES has completed work on its debut album at the Little Creek Studios in Switzerland with producers V.O. Pulver and Schmier (DESTRUCTION). The band says: "It turned out great and we are really excited to share the track 'Burning Witches' with you!"

Check out the song in the YouTube clip below.

He continues: "The BURNING WITCHES will sure get their fans. Their sound, in between classical [JUDAS] PRIEST and U.S. power metal like ICED EARTH, caught my attention right away."

BURNING WITCHES was founded during spring 2015 in Brugg, Switzerland, by guitar player Romana Kalkuhl. It has always been her big dream to perform with a women's heavy metal band on stage. During the music university studies, she already started her first group together with Kevin Schaffer, with whom she has recorded two albums and played several concerts.

In 2015, Romana started to look for talented ladies for the new combo. Jeanine Grob (bass), a longtime friend, became the first official member. At a party at a festival, Romana met Seraina Telli (singer) for the first time. It clicked right away betweens the two girls, on a musical and on a personal level. Seraina brought in many ideas and a lot of experience because of her studies at the Music Academy and her band SURRILIUM. The guitarist and the singer became a great songwriting team right away.

Romana wrote Schmier from DESTRUCTION about her new project, and the ladies brought him onboard as a producer/consultant.

After an intensive search and different auditions, BURNING WITCHES found Lala Frischknecht the perfect drummer for the all-girl metal band.