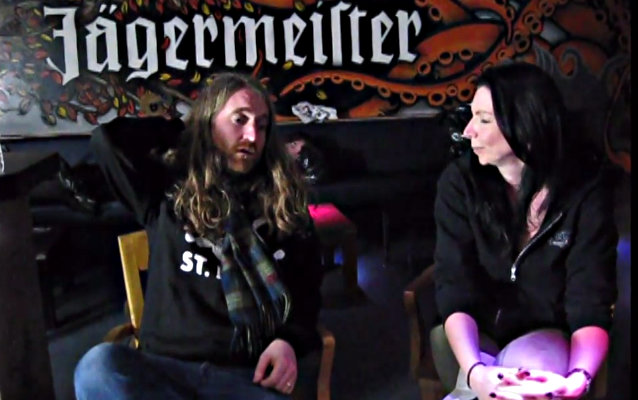 GetYourRockOut conducted an interview with vocalist Cormac Neeson of Irish rockers THE ANSWER during the band's recent U.K. tour. You can now watch the chat below.

"New Horizon", the fourth studio album from THE ANSWER, which features mixes from rock icon Mike Fraser (AC/DC, METALLICA), was released on September 27, 2013 in Europe and October 1, 2013 in North America via Napalm Records.

Since its third studio album in late 2011, THE ANSWER iinstigated a major shakeup in its circumstances and with new management, live booking agents and with new record label on board, late 2012 saw them enter the studio with ex-LITTLE ANGELS vocalist Toby Jepson at the production helm.

The band was honored and privileged that the late Storm Thorgerson and his team designed the artwork for "New Horizon" and Storm was working on the album cover design just before his sad passing.

In an interview with Sea Of Tranquility, THE ANSWER frontman Cormac Neeson stated about "New Horizon": "It's an aggressive, hard-rockin' album that gets your ass shaking, for sure.

"I think we've got stronger at songwriting with every album. We also know how to play a bit now too. Along with some help from Toby, we were able to compile around twenty five good songs before we went into the studio. Then it was just a case of picking the ten that would make the clearest statement of where we're at as a band. Although there's a lot of great stuff on the limited edition digi version and vinyl edition of the album, including three tracks that were recorded during the actual album session but just missed out on the final cut. There's also a few interesting arrangements of some of the album tracks."