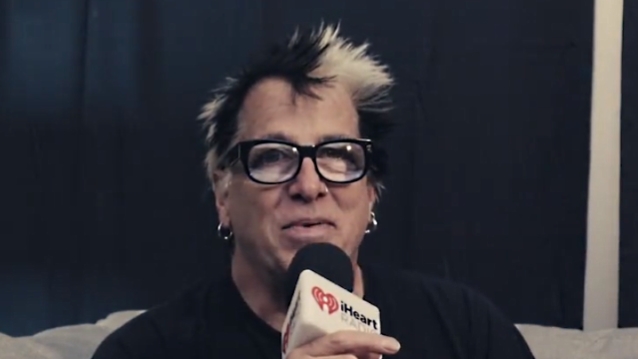 California rockers THE OFFSPRING recently completed work on their long-awaited tenth album. The follow-up to 2012's "Days Go By" was once again produced by Bob Rock, who also worked on the band's last two LPs.

Asked by the iHeartRadio Canada for an update on the new disc, guitarist Kevin "Noodles" Wasserman said (see video below): "It's done. The record's done. It's in the can. [We're] making plans for photo shoots and videos. We've done it all ourselves this time. We worked with Bob Rock again. He's great — he's the coolest guy ever — and we just work really well together with him."

Pressed about the musical direction of the new OFFSPRING material, Noodles said: "'Coming For You', that's essentially the first single — we released that about four years ago now. And essentially, that's the first single off the record. We're playing another song live, called 'It Won't Get Better'. So we ended up working on more OFFSPRING-sounding songs to fill out the record. And I think we might hold a couple of those funner, 'Pretty Fly [For a White Guy]' songs back for maybe the next record."

This past March, singer Dexter Holland told U.K.'s Kerrang! magazine that THE OFFSPRING's new album "sounds like our old shit. That's what I'm supposed to say, right? I don't really know how to describe it," he said. "I guess it's punk rock, but then we throw in a couple of songs that aren't what you'd normally predict. We have a lot of really fast stuff on there, plus a couple of things that you might not really expect from us."

Dexter also confirmed that THE OFFSPRING was without a record label and was looking into various options about how to make its new music available to the masses.

“We were on Sony ever since 'Ixnay [On The Hombre]' — and we finished out our contact," he said. "We did, like, seven records for them. We've got to be the only band that's ever finished out a record contract without being dropped by their record label. We didn't get dropped, we just finished! But then we took a couple of years off because I wanted to go back to school, but now it's, like, 'We're back! Anybody want to sign us up?"

Last fall, guitarist Noodles told Junkee that THE OFFSPRING had been contemplating releasing all of its new music on two separate albums. "I think there's a record's worth in there, but we're thinking that maybe the songs are just a little too different," he said. "We know there's a song or two on every record that comes out of left field for us, but it's more than just a couple this time. Right now, we're entertaining the idea of doing two records — one where we can put all of these, and another of straight-up OFFSPRING songs."

THE OFFSPRING debuted "It Won't Get Better" live in concert in June 2018 and has been performing it ever since. Noodles described the track as "kind of like a straight-forward OFFSPRING song."

THE OFFSPRING's last single, the aforementioned "Coming For You", dropped in 2015.