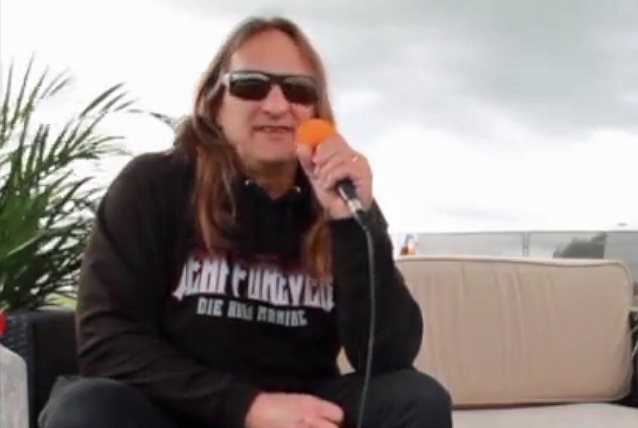 Drummer Tom Hunting of San Francisco Bay Area thrash metal veterans EXODUS says the band may "step outside the box" while recording the follow-up to 2014's "Blood In Blood Out".

In an interview with Jax from TotalRock Radio at this year's edition of the Download festival, which was held June 9-11 at Donington Park in Leicestershire, England, Hunting was asked what's next for EXODUS in 2017.

"We're writing new music and we're recording in probably fall, early fall to late fall, we're not sure," Tom said. "Hopefully we can come back and play this beautiful festival [Download] again."

Hunting was then asked if there would be any "surprises" for the band's next studio effort:

"Can't really say that yet," Tom said. "We're not afraid to take chances musically. Obviously, we're a band that's been around for a while. We're not going to hurt ourselves no matter what we do. It's still going to sound like EXODUS. I wouldn't even call it 'experimentation.' I would just call it 'stepping outside the box a little bit.' Our core fans, they like us to be thrash and we are that."

EXODUS's next studio album is planned for an early 2018 release.

"Blood In Blood Out" was EXODUS's first album since the departure of the group's lead singer of nine years, Rob Dukes, and the return of vocalist Steve "Zetro" Souza, who previously fronted EXODUS from 1986 to 1993 and from 2002 to 2004.

Hunting told the "Mike James Rock Show" at Download that the band has "five or six" new songs structured so far for the follow-up to "Blood In Blood Out", as well as "bits and pieces" of the remaining few tracks that will appear on the forthcoming disc.