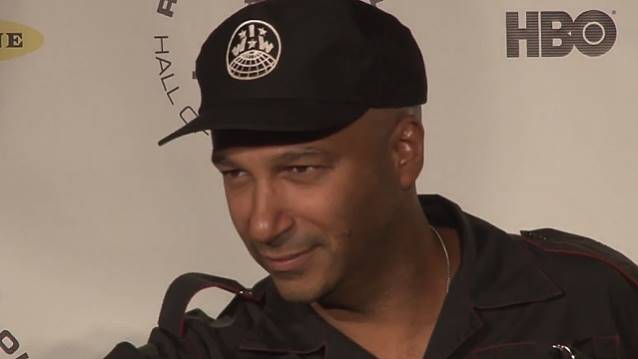 According to The Pulse Of Radio, RAGE AGAINST THE MACHINE and E STREET BAND guitarist Tom Morello reissued his 2011 "Union Town" EP as a free download at MorelloMayDay.com in honor of Thursday's (May 1) celebrations around the world of the international workers' holiday known as May Day. The EP includes original acoustic tunes as well as covers of Woody Guthrie's "This Land is Your Land", Merle Travis' "16 Tons" and a live version of Morello's "Union Song".

The live take of "Union Song" was recorded in Madison, Wisconsin when Morello joined thousands to protest an anti-union bill proposed by Republican governor Scott Walker.

Morello wrote about the EP reissue, "This record is dedicated to working people of every nationality, age, color, and religion who have the courage to stand up for justice and dignity in the workplace . . . and beyond. Enjoy the tunes and fight the power!"

Morello told The Pulse Of Radio a while back that he's never been afraid to use his platform as a musician to speak out on the issues that concern him. "People ask the most asinine question, like, well, why — 'I don't want to hear from you — shut up and rock,' you know. But when you pick up a guitar, you don't put down your First Amendment rights. What I would say is 'You should be speaking out as well.' Like, why should we just leave it to a bunch of billionaires and crooks to run our country?"

The guitarist has been a semi-permanent member of Bruce Springsteen's E STREET BAND since early 2013, and contributed to eight tracks on Springsteen's latest album, "High Hopes".

RAGE AGAINST THE MACHINE has not played live since 2011, when it staged what may have been its last concert in Los Angeles.