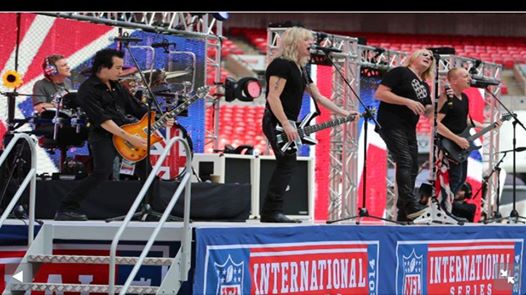 DEF LEPPARD has tapped TRIXTER guitarist Steve Brown to fill in for Vivian Campbell while Vivian is undergoing stem-cell treatment in his continuing battle with Hodgkin's lymphoma.

Brown made his live debut with DEF LEPPARD earlier today (Sunday, September 28) at the pre-game show at the first of this year's three NFL International Series games when the Oakland Raiders hosted the Miami Dolphins. He will also perform with DEF LEPPARD in Santa Ynez, Rancho Mirage and Temecula in late October and early November.

Video footage of Brown's debut appearance with DEF LEPPARD can be seen below.

Campbell — who before joining DEF LEPPARD in 1992 was well known for his work with DIO and WHITESNAKE — went public with his Hodgkin's lymphoma diagnosis last summer, but announced in November that he was in remission.

The term "remission" means that the symptoms of the cancer have either been eliminated or reduced. When the tumor is completely gone, doctors call it "complete remission."

However, Campbell revealed earlier in the year that the cancer had returned and he was battling the disease with a new high-tech chemo treatment.

"Next year will be very busy for DEF LEPPARD with a new album and a world tour, and frankly, I don't think they would sound as loud without me, so I have no intention of letting the team down!"