"We are going to have the 10 hottest, sexiest girls in Las Vegas leading the team, the best beauties in the league," Neil tells Robin Leach of the Las Vegas Sun. "The Dallas Cowboys cheerleaders, who once made headlines around the world, will pale by comparison to what we assemble.

"Ten guys will get to watch each home game with the Posse in a convertible on the field. It will be the hottest ticket in town — everybody will want to get close to our cheerleaders. This really will be 'Girls, Girls, Girls'! They will look as if they have stepped right out of the hottest music video of all time."

The Las Vegas Outlaws will host their inaugural match in Las Vegas on March 30 against Gene Simmons and Paul Stanley's L.A. Kiss team.

Asked what went into his decision to buy the Las Vegas Outlaws, Neil told ESPN 1100AM's Chuck Ojeda: "Here's the thing: I love arena ball; I think it's so fast and it's exciting. And so I started out by buying a minority share of the Jacksonville Sharks — just to kind of get my feet wet — and then asked to get the franchise, and all the team owners approved it. It's like a dream come true. Getting an expansion team in a league is pretty hard as it is. So it's exciting. We've already signed some great players. And then we have the expansion draft."

Regarding what having the Las Vegas Outlaws will do for the city of Las Vegas, Neil said: "Arena ball is all about family and community. And that's what I wanna do; I wanna make something exciting for the community to come out and rally behind — their football team — and have a fun thing for families to bring their kids to the games and yell and scream. You're there in the game; you're yelling and screaming at the refs and screaming at the coaches and you're screaming at the players. And so it's right in your face. So it's cool. And hopefully we'll get the whole community around us, and by the looks of it, it's working." 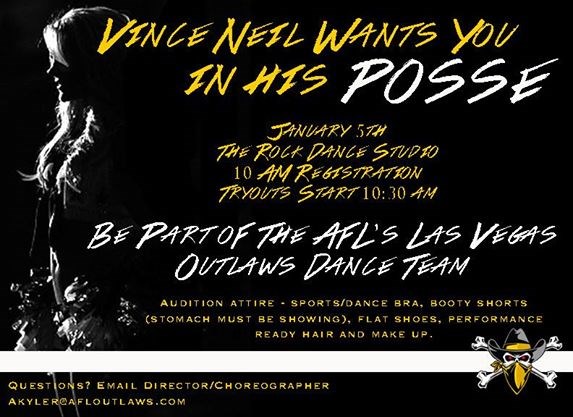