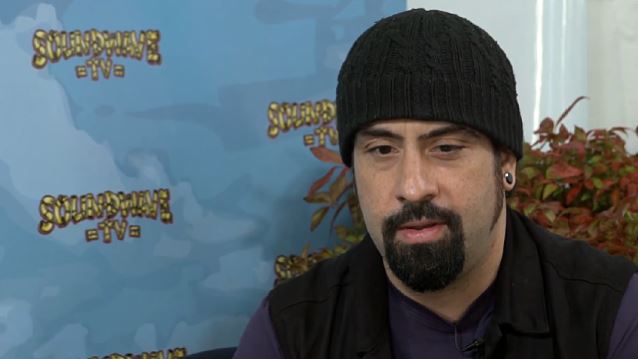 In a brand new interview with Soundcrave Magazine, guitarist Rob Caggiano of Danish/American metal rock 'n' rollers VOLBEAT was asked when fans can expect to hear the follow-up to the band's fifth album, "Outlaw Gentlemen & Shady Ladies", which was released last year.

"We have been floating around some ideas," he said. "We will probably go back to the studio next year, maybe in August. We have some much-needed down [time] coming up. We finish this album cycle in November in the UK, then obviously the holidays and some family time. Next year, we will start getting into creative mode and start doing some stuff."

Caggiano also spoke about whether there is pressure from record labels to stay out on the road 365 days a year in order to capitalize on the band's popularity.

"No," he said. "When you're in a band and doing things on this level, there is like almost a certain protocol. You make a record, you go tour and do the entire album cycle playing as many places as you can then you regroup. You have to take some time to think about more music; that's just how it works! The crazy thing for me is that I don't feel like I have had any time off for an extreme amount of time. Like, years, because there was ANTHRAX, then THE DAMNED THINGS [project], back to ANTHRAX then to VOLBEAT. So I didn't follow the cycle most musicians do. [Laughs] So, I have been on the road constantly. It's completely insane. It's, like, when I go home, I can't sleep; I am just so used to being on a bus. But I just love this stuff!"

Caggiano announced his departure from ANTHRAX in January 2013 to focus on his other passion: producing records. The following month, it was revealed that he had joined VOLBEAT after serving as producer on VOLBEAT's latest album, "Outlaw Gentlemen & Shady Ladies", alongside longtime production partner Jacob Hansen, who produced and mixed the band's prior four albums. Caggiano's other producer credits include THE DAMNED THINGS, BLEEDING THROUGH and ANTHRAX, and he was a member of ANTHRAX for two tenures — from 2001 to 2005 and again from 2007 to 2013.