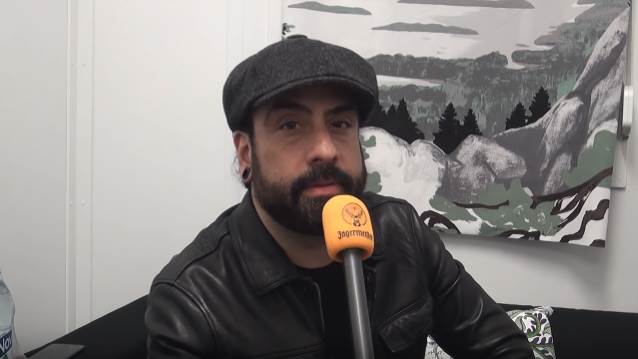 VOLBEAT guitarist Rob Caggiano was interviewed by Kaaos TV before the band's June 28 headlining show at Provinssi in Seinäjoki, Finland. You can now watch the chat below.

Asked for his thoughts about the recent passing of PANTERA and HELLYEAH drummer Vinnie Paul Abbott, Caggiano said: "I didn't believe it [when I first heard about it]. I thought it was a rumor or something… I still can't believe it, to be honest — I really can't. It's crazy. I mean, I just saw him — I just saw him in [Las] Vegas before we came out here [to Europe]. It doesn't make sense that he's not around anymore."

Rob went on to say that he has "toured with HELLYEAH a lot" over the years. "We did a bunch of shows when I was with ANTHRAX. THE DAMNED THINGS also did some touring with HELYEAH, and now with VOLBEAT, we did a bunch of stuff," he said. "And I always say, Vinnie Paul was my favorite guy to be on tour with. When he was on the road with us, you know it's gonna be a good time. He was just a great guy — really, an amazing, amazing dude… He was always super positive, always happy, full of life. He was the best — absolutely the best."

Caggiano also talked about the PANTERA influence on him as a musician growing up. He said: "I think anyone that is around our age, coming up in the metal scene, it would be impossible not to be somewhat touched by what PANTERA did and what they accomplished. Obviously, the were an incredible band. For me, as a guitar player, Dimebag [PANTERA guitarist and Vinnie's brother] was epic — he was an amazing player. I think what they did really kind of took metal to another place at that time and it opened up a lot of doors for other bands, I think.

"For me, back then, it was kind of like… When I was way younger, I was really into the whole 'Big Four' — that whole thing, when that term was first coined; the ANTHRAX, MEGADETH, SLAYER, METALLICA thing," he continued. "But then it kind of was, like, 'Okay, who are they gonna pass the torch to?' And PANTERA was right there, and they just kind of really took it really far. Yeah, again, they were an incredible band."

Vinnie Paul will be buried today (Saturday, June 30) next to his brother, and his mother, Carolyn, at Moore Memorial Gardens cemetery in Arlington, Texas.

A public memorial for Vinnie Paul will be held this Sunday, July 1, at Bomb Factory in Dallas, Texas.

Vinnie passed away on June 22 at his home in Las Vegas at the age of 54.

VOLBEAT will enter the studio in November to begin recording its next album for a 2019 release. The follow-up to 2016's "Seal The Deal & Let’s Boogie" will be the band's first full-length effort to feature bassist Kaspar Boye Larsen.

"Seal The Deal & Let's Boogie" arrived in June 2016 and featured the chart-topping "Black Rose" and "The Devil's Bleeding Crown", in addition to the Top Five title track.