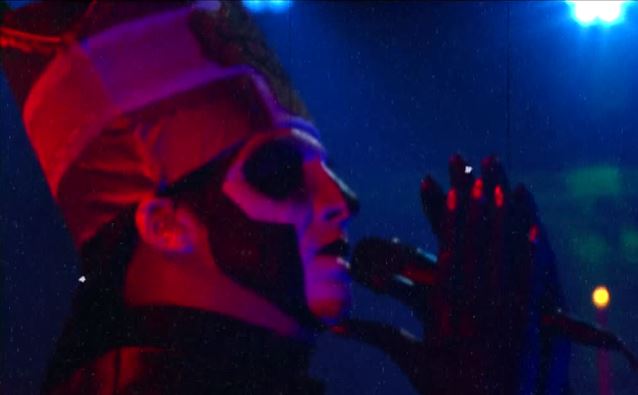 Swedish occult rockers GHOST performed their song "Cirice" on last night's (Friday, October 30) episode of "The Late Show With Stephen Colbert". Video footage of their appearance can be seen below.

GHOST's third album, "Meliora", entered The Billboard 200 chart at position No. 8 with first-week sales of just over 29,000 units — nearly all from pure album sales. The set follows the No. 28-peaking "Infestissumam", which was released in 2013 and has sold almost 70,000 copes in the U.S. to date.

"Meliora" was released on August 21 via Loma Vista Recordings. The CD was helmed by Klas Åhlund, a prolific songwriter, producer and guitarist who is also a member of the Swedish rock band TEDDYBEARS, and was mixed by Andy Wallace (SLAYER, NIRVANA, SEPULTURA, LINKIN PARK, GUNS N' ROSES).

Asked if there was a particular direction GHOST was looking to go in on "Meliora", one of the Nameless Ghouls told Guitar World magazine: "Yes. There were a few guidelines we were working off of. The main one was that we felt on 'Infestissumam', there was definitely a shortage of… I don't know what the word is… let's say riffage. Whereas that was not the case on the first one ['Opus Eponymous']. So we wanted to make a record that had more riffs on it, because the guitar took a bit of a backseat on 'Infestissumam'. And the main reason for that was the production. The guitars were just put in the back. If we were to take all the tapes from that album and go into a different studio and remix the whole thing, I'm sure it would sound very different. So this time we wanted to focus on the guitar aspect from the start. Secondly, from a thematic standpoint, we wanted the whole record to have something of a futuristic feel. So there are organs and things like that, but there are also other things that we excluded, because this is not, you know, our medieval record. This is our futuristic, urban-dystopia-metropolis record. So we knew it had to possess a certain sort of flair. Because if you want to make a futuristic record that is sort of '80s-sounding, you would do that by using a lot of chorus everywhere. But that's not what we were trying to do. Or you could make a JUDAS PRIEST or IRON MAIDEN–style record that sounds very futuristic. But that's not what we were trying to do either. Sometimes you have to know what to leave out."

Regarding GHOST's sound, a Nameless Ghoul told Rolling Stone magazine: "We sort of came up with this mixture where we could combine basically all our favorite childhood and adolescent music styles. And we grew up listening to a lot of different music. A lot of Swedish music, and also a lot of '60s and '70s bands — AOR things like KANSAS and YES and CHICAGO and BOSTON. JOURNEY. TOTO. Professional-sounding music. And with all of that we found a way, for us at least, to make sense of having an extreme-metal riff and then throwing a pop melody over it. So that was the initial thing. After that it was, 'Oh, shit! Maybe we could turn it into a horror-rock band, and we could throw in this very childish sort of fascination of horror films! And also ALICE COOPER! And KISS!" 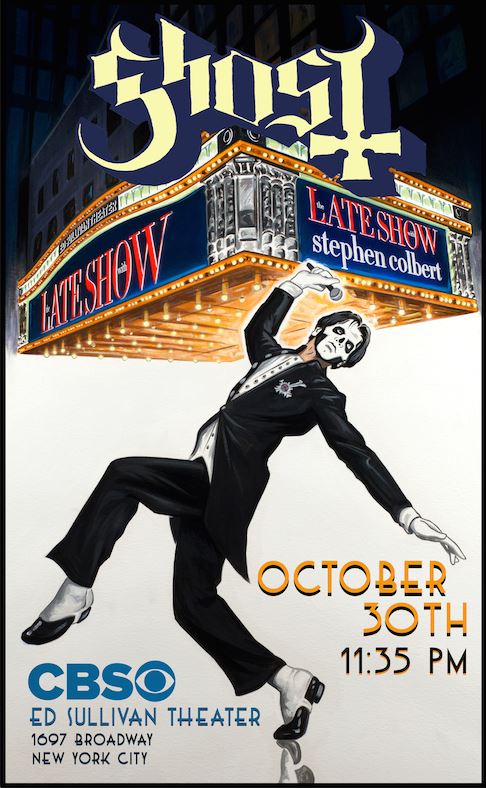