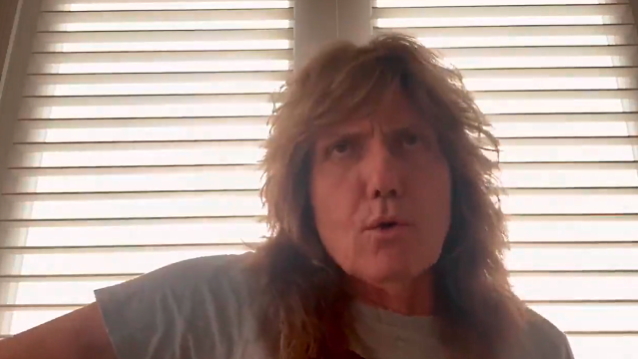 As previously reported, all of WHITESNAKE's previously announced touring activities, including this summer's U.S. trek with SAMMY HAGAR & THE CIRCLE and NIGHT RANGER, have been canceled so that Coverdale can undergo surgery for bilateral inguinal hernia.

Earlier in the month, WHITESNAKE postponed its Japanese tour due to the ongoing threat of the coronavirus.

Coverdale had both his knees replaced with titanium in 2017 after suffering from degenerative arthritis. He later explained that he was in so much pain with arthritis in his knees that it hampered his ability to perform live.

WHITESNAKE has been touring in support of its latest album, "Flesh & Blood", which was released last May via Frontiers Music Srl. The disc follows the 2011 critically acclaimed studio album "Forevermore" and 2015's "The Purple Album", a reimagining of DEEP PURPLE classics from Coverdale's time in that band.

Joining Coverdale on "Flesh & Blood" is the band comprised of Reb Beach and Joel Hoekstra on guitar, Michael Devin on bass, Tommy Aldridge on drums, and Michele Luppi on keyboards.