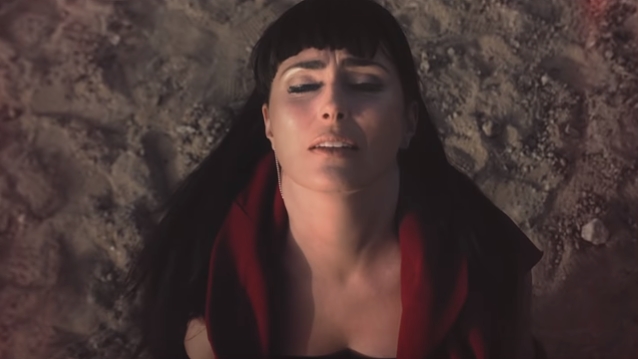 Prior to WITHIN TEMPTATION's performance in Warsaw, Poland on October 27, vocalist Sharon Den Adel spoke with Interia.tv. The full conversation can be seen below. A few excerpts follow (as transcribed by BLABBERMOUTH.NET).

On the nearly five-year gap between "Hydra" and new album "Resist":

Sharon: "It took me a long time because of several reasons. We had a heavy touring schedule with 'Hydra', and we toured a long time. We've been together as a band for such ages, and so when I came back, I didn't have any inspiration. There was a lot of things happening in my personal life, so all that came together and I just couldn't write music. I was very much blocked. I needed for myself to discover if I still wanted to do the touring and also writing music for WITHIN TEMPTATION, if I still wanted to be in the band, because it didn't bring me any joy at the time. I was just not in a very good place at that time. Now, I'm feeling a bit — a lot better, actually, and the strange thing is that I couldn't write because I didn't feel the music. I didn't know where to go. Not just me, but also the guys that I work with find it very difficult to write for WITHIN TEMPTATION, because we didn't have any inspiration. It was not just me, but I had a lot of other issues besides not being able to write. That's why it took a long time, and when I did start writing again, I wrote [a] different kind of music — I wrote singer-songwriter kind of songs, and that's not really WITHIN TEMPTATION material. I needed to get that out of my way, so I made a solo album, and when it did start again — when I did feel the songs coming back again to us, and the inspiration and everything — we wrote this album and recorded it in one year. Last summer until this summer, we recorded it, wrote the songs and produced everything."

On whether she considers "Resist" to be a "game changer":

Sharon: "For me, it is. You can still hear it's us, but I think we've never sounded [like] this before. It's a groovy album; it has a lot of urban sounds in it; it's maybe a little less symphonic, but it still has a lot of metal, and it has rock still, but it's less symphonic, maybe. We are symphonic on this album, but not everywhere in every song, but in certain place [sic] where it's beautiful and has a purpose... I think instead of fairytale, maybe it's more futuristic. It has a different feel to it now."

On the band's longevity:

Sharon: "I can't speak for other bands why they stopped, but for us, it's always been a challenge to find a new direction musically and also find new inspiration, and if you find it, you find motivation and the energy and love to put time and energy into it to write new songs. If you don't know which direction to go, then it just dries up. We always want to renew ourselves, and if we're not able to, then we feel like the music's not alive anymore, the band is not going forward anymore. We always want to have this forward line going up. Don't want to go down. Don't want it to be the same all the time, which is okay for some bands, because they like to make the same record more or less, or same style every time, and we want to change our style a little bit every time."

On whether her doubts about whether to continue have dissipated:

Sharon: "We did find a new love for writing music again. This is a different kind of WITHIN TEMPTATION than in the past, but not that much different. It's different, and it's still us, but in a different musical direction, but still very cinematic and very epic in a way, but a different sound to it, a different flavor. We have found a new road, and maybe we can maintain energy from there, but we only look one album ahead. I like to play now; I love it; and I'm living in the here and now. What I'm going to do in three years, I don't know the answer."

On what she would recommend people to resist against:

Sharon: "I think everybody has their own issues in life, and what we wanted to say with this album was we were very much inspired by the digital age that we're living now in, so it's more like that we're always trackable and traceable at every time of the day, and that concerns me in a way — especially because the fact that we don't know who's at the other end of the computer. Is it the company? Is it the government? Big companies, they're having so much power nowadays. It's dangerous that they always try to box us into a certain... they say all the algorithms are based on, 'Okay, what are your interests? Then you need to see this, this and this.' But maybe I want to see something different than the algorithms, and I hate the fact that I'm caved into what they think I'm supposed to see, whether it's news or music. I buy something on Amazon, for instance. It's strange that I still get, a year after, the same kind of information about the certain product that I bought with them... I want to see everything, not just the things they think they can sell. I want to go dig in. I want to see bigger pictures."

"Resist" will be released on December 14. It is the band's first release through Spinefarm Records, the specialist hard rock label of Universal Music Group.