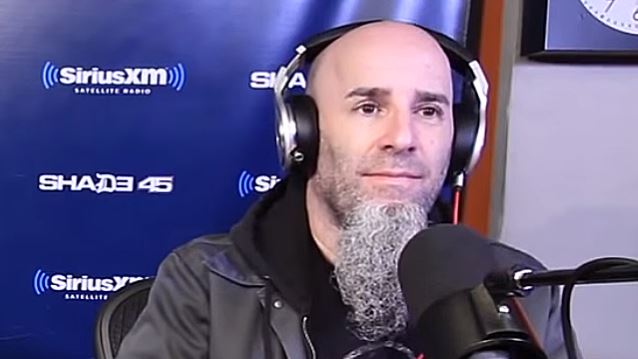 ANTHRAX guitarist Scott Ian was recently interviewed on the SiriusXM show "Sway's Universe", hosted by MTV personality Sway Calloway. You can now watch the chat below. A couple of excerpts follow (transcribed by BLABBERMOUTH.NET).

On the origins of heavy metal:

Scott: "People can argue this, and I do get into this nerd arguments with my friends sometimes when we're drinking, but, for me, it's BLACK SABBATH. It all started with them. You had these guys who lived in Birmingham, England, in a really depressed , post-World War II manufacturing town, and it just made sense that the music they started making just had this really dark, heavy sound. And for me, the first three or four BLACK SABBATH records are kind of the blueprint for heavy metal. Tony Iommi wrote every riff there was to write, and everything that came after was just a derivative of it in some way, shape or form. But, for me, it all started with BLACK SABBATH."

On whether the rise of the grunge movement in the early '90s crippled the heavy metal scene:

Scott: "Not real metal. But what it did was the stuff in the '80s that got really, really big on MTV — what we used to call the 'hair' bands; bands like POISON and RATT and WARRANT and that kind of stuff, which we had nothing to do with… But in the public eye and in the media, they would lump those bands together with bands like ANTHRAX and METALLICA. And we're, like, 'We have nothing to do with that scene. We don't look like those people. We're not writing pop songs. We're not on the radio.' We weren't dressed like my aunt. We had nothing to do with that. So when grunge came around, and NIRVANA blew up, and then bands like PEARL JAM and SOUNDGARDEN and whatnot, and they're just wearing their dirty t-shirts and jeans and sneakers, so that kind of blew out that whole scene, that 'hair band' scene — it killed that. But it did become a little bit more difficult, certainly in the '90s, for bands like us, but we were able to weather that. We just put our heads down and [went] to work, basically, and just kept doing what we were doing."

ANTHRAX's new album, "For All Kings", will be released on February 26, 2016 via Nuclear Blast in Europe and Megaforce in the U.S.