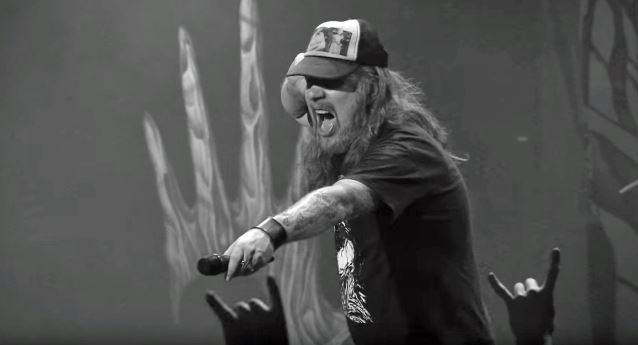 "The Circular Ruins", the new performance video from Swedish melodic death metal pioneers AT THE GATES, can be seen below. The clip features footage filmed by Live Media Group during the band's April 2015 show at Chicago's House Of Blues during the Decibel Magazine Tour.

"The Circular Ruins" is taken from AT THE GATES' latest album, "At War With Reality", which was released on October 28, 2014 (one day earlier internationally) via Century Media. The CD, which sold 7,700 copies in the United States in its first week of release to debut at position No. 53 on The Billboard 200 chart, was recorded at Studio Fredman in Gothenburg and was mixed at Fascination Street Studios in Örebro, Sweden with Jens Bogren (OPETH, KATATONIA, SOILWORK, PARADISE LOST, KREATOR).

AT THE GATES recently announced another North American tour for February together with DECAPITATED, THE HAUNTED and HARMS WAY as well as a first bunch of European festival dates for 2016, including appearances at Party.San and Summer Breeze in Germany, Metal Days in Slovenia and Leyendas Del Rock in Spain.

AT THE GATES vocalist Tomas Lindberg told Jägermeister last November about the band's plans for the future: "I think we will be touring this [album] until at least the end of next summer, as it looks now. After that, we will see where we're going. It is a conscious decision as well to do that — to not plan too much ahead, to live in the moment, to not put pressure on ourselves writing while we're enjoying this. 'Cause that's what happened in the '90s with us, and that's why we imploded, so we don't wanna do the same mistake twice. But, I mean, I can say that we're not planning not to do a follow-up [album], if you know what I'm saying. So I have high hopes. We will see where it takes us."