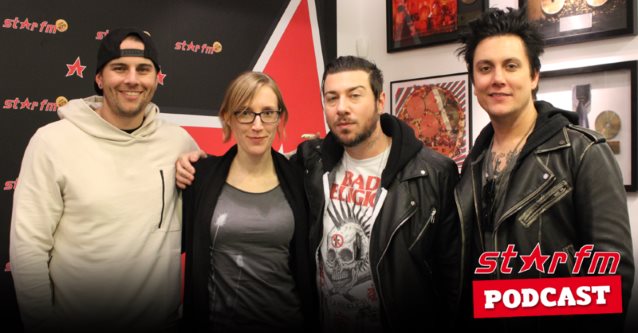 Speaking about the surprise release of AVENGED SEVENFOLD's latest album, "The Stage", Zacky said: "Yeah, we definitely wanted to do something that no rock bands have ever dared to do. And for us, we wanted to make it exciting for our fans and we wanted to give 'em everything at once. Rather than lead up the album, how most bands do, over the course of many, many months, we wanted to let them make a decision for themselves on what they thought of the album and get it before they got a bunch of other people's opinions on it. Just how we used to open up records and be the first to listen or fall in love… Nowadays, we feel like all that magic is taken away. People listen to a song one or two times and then they're on to the next thing. So we just wanted to do something different; we wanted to get people talking about it. We had no idea whether or not it was gonna work, but we knew, no matter what, our fans would appreciate it."

Asked if it gets harder for AVENGED SEVENFOLD to constantly come up with new ways to present its music, Zacky said: "I think for us, we get attention because we just want to do things differently. We don't try and get attention. The first single ['The Stage' title track] that we released was eight and a half minutes long, and half the world thought we were crazy, 'cause most bands release short songs. But, for us, it was the right thing to do, and we made a really exciting music video to go along with it, that people also said, 'What is this video about? What are people doing?' So we don't go out of our way to try and get people's attention; we go out of our way to make it exciting for our fans. And it's cool that people seem to appreciate that or talk about it."

"The Stage" came out less than two months ago. The group made the album available at midnight on October 27 with almost no promotion beforehand, save for the arrival of a new song one week earlier.

The surprise release of the disc, which was announced the night it went on sale, earned the lowest sales of an AVENGED SEVENFOLD album in eleven years — less than half the tally of its previous two efforts.

The marketing plan and launch of the album, the band's first for Capitol Records, was months in the making, starting with the projection of the band's logo, the Deathbat, on buildings in cities around the world. The campaign even included some misdirection, as the group had its friend Chris Jericho "accidentally" leak a fake album title and release date.