Drummer Bobby Blotzer has vowed to continue "Ratt -N- Rolling in December and onward" with his version of RATT despite the fact that he was expelled from the partnership which owns the RATT name and brand.

Less than a month ago, a judge ruled against Blotzer with respect to whether bassist Juan Croucier had committed trademark infringement by using the RATT name and logo to advertise his band RATT'S JUAN CROUCIER back in the fall 2015. The judge furthermore decided that the corporation WBS, Inc., of which Blotzer and guitarist Warren DeMartini were thought to be the sole shareholders, and which Blotzer has claimed owns the RATT name and brand, did not have ownership interest in the RATT marks and that the name and brand was still owned by the members who were part of the original RATT partnership agreement: Croucier, DeMartini, Blotzer and singer Stephen Pearcy.

In a new message posted on the official RATT web site — which is apparently still being controlled by Blotzer — the drummer wrote, "Don't believe everything you're hearing," and adding, "REAL news is coming very soon."

Blotzer also confirmed that his version of RATT will play four shows in December, with "more dates… scheduled for 2017."

On November 12, Blotzer defended his decision to carry on with his version of RATT, telling Metal Gods TV: "In my heart, I'll always love RATT — I call it the Class Of '84 — but I've been in this band thirty-five years come next March, and I did a lot of begging and pleading for everybody [from the classic lineup] to come work and nobody wanted to do it. Now they've seen how big that we've gotten out here with the new generation, as I like to call it, still RATT. We've been playing in front of tens and tens of thousands of people — and I'm not even going overboard on that. We did one show with Miranda Lambert in Sturgis — forty thousand people; that was unbelievable. So these guys are getting a kick out of it. Our singer is so good — Josh Alan. I mean, he replicates Pearcy's voice and sound of the lead singing of RATT, which is key. And that's why other bands that continue on with other members [and without the ones] that don't wanna tour, they're able to do it — you have to make it sound... in building block number one, I think, with the lead singer. And we didn't do that before when Stephen was out and we had Jizzy Pearl. God bless him, but you need to have it sound like just… In my opinion… I've watched so many bands do it, and they sound just like the record, so that's what we strive to do. And we have fun; we have so much fun."

Blotzer also reiterated his belief that RATT fans don't want to hear the band's classic songs performed differently from the original recorded versions. "I remember going down to see DEEP PURPLE, and I remember going to see JOURNEY, and I remember going to see VAN HALEN… I mean, the list is so long. We actually made a list, and there was, like, fifty-three bands that have one or two [original] members [left]… three… whatever. I don't like it, but I would rather see something than nothing," he said. "And that's what I convey… 'Cause I come out and say hello to everybody from my drum set. I come out front and kind of just say, 'Hey, what's up? Everybody, remember me?' And they're real nice about it. I just say, 'Hey, there's some new faces up here, but I just want you guys to know: it's for the love of RATT music. I wanna play it. Personally, I love RATT music, just like you guys do. Do you love this band?' And they go crazy. 'Cause they do love the band. I'm just stoked to keep doing it, and I wanna keep doing it."

Pearcy, DeMartini and Croucier earlier in the week announced that they expelled Blotzer from the RATT partnership and said that Blotzer may now only refer to himself as a "former member of RATT," as per the partnership agreement. DeMartini, Pearcy and Croucier also revealed that they will perform as RATT at next year's edition of the M3 Rock Festival, set to take place on Friday, April 28, 2017 and Saturday, April 29, 2017 at Merriweather Post Pavilion in Columbia, Maryland. 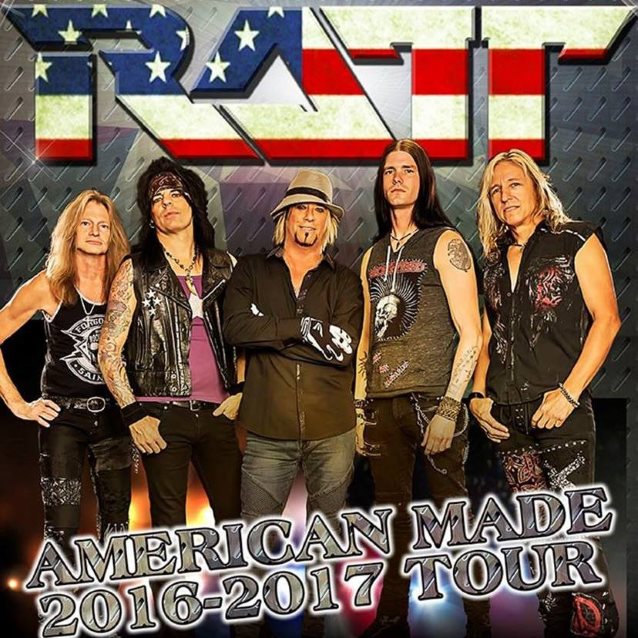