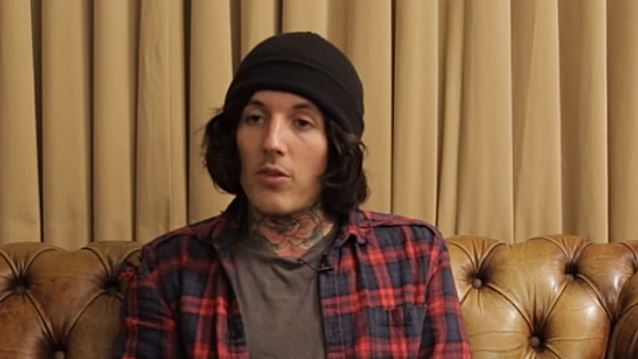 According to The Pulse Of Radio, BRING ME THE HORIZON singer Oli Sykes has released a new collection through his clothing brand, Drop Dead, that is inspired by the new "Star Wars" movie, "Rogue One". Working in collaboration with Lucasfilm, Sykes said on Twitter that the the line was "an intensely challenging project for both sides, but worth it."

One of the jackets is designed in distressed denim and is aligned with the Rebel Alliance via patches and hand-painted designs with sayings like "What chance do we have?" and "We have hope." Another item, a white bomber jacket, nods toward the Empire with an image of an Imperial Stormtrooper and other iconic symbols.

Sykes's company has also posted a video about how these limited edition items were created.

"Rogue One: A Star Wars Story" was released in theaters last Friday and grossed more than $290 million worldwide in its opening weekend.

BRING ME THE HORIZON recently issued a music video for "Oh No", the latest track taken from the band's 2015 album, "That's The Spirit".

The disc reached No. 2 on The Billboard 200 album sales chart and featured the hits "Happy Song" and "Throne".

Heres some shots of our collaboration with @starwars for #rogueone was an intensely challenging project for both sides, but worth it. pic.twitter.com/biHWwQ7mCv