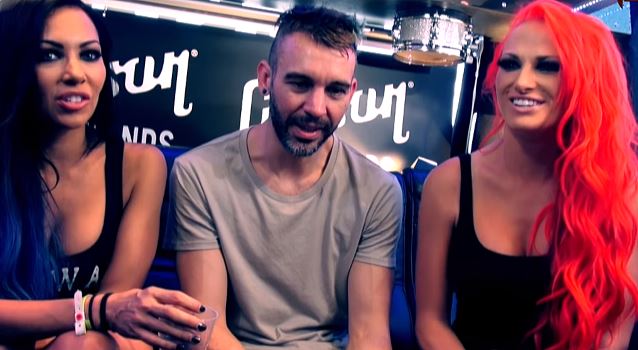 Franck Védrines of A.B.D.P. Editions conducted an interview wih BUTCHER BABIES members Carla Harvey (vocals), Henry Flury (guitar) and Heidi Shepherd (vocals) at this year's Hellfest, which was held in June in Clisson, France. You can now watch the chat below. A couple of excerpts follow (transcribed by BLABBERMOUTH.NET).

On how they would describe BUTCHER BABIES:

Heidi: "A lot of people try and… 'Oh, they're neo-thrash or groove or… I mean, there's so many different kinds that people try and classify us as, but it's impossible, because we're very diverse. We all came from different backgrounds in metal. I'm a nu-metal kid; I grew up loving SLIPKNOT, KORN, LIMP BIZKIT… I love the nu-metal. Henry here is more of the experimental metal… the MESHUGGAH… He brings that influence. Our bass player, Jason [Klein], he loves death metal, so he brings the death metal influence. And our drummer, Chris [Warner], is a hardcore metal kid…"

Carla: "…a thrash metal/punk rock kid. So we stir that all in one big pot and we make BUTCHER BABIES. And I think it's a unique thing, and that's why we've gotten so far in the last five years — because we're making a sound that's completely different than anyone else. To top it off, like I said, two female vocalists, which hasn't been done in metal."

Heidi: "And another thing, too… I think a lot of people are missing the energy from old thrash bands. The energy on stage, it's captivating. And, I think, over the past ten, fifteen years, besides a few bands here and there, I think that we've been all missing it. So we're trying to, hopefully, bring that back."

Heidi: "I grew up just not the pretty girl at all. I had, basically, lots of freckles, huge ears, a big nose… just a like a boy body, completely. I was an athlete, and I had just nothing… Nothing! My entire life; that's how I grew up. And I was completely made fun of my entire life. I was never the pretty girl. That's not anything I ever was used to. So for people to say that now… I love makeup. I think it's an art form. You should see me without it. It's terrifying. [Laughs] But the thing is, for people to say, 'Oh, they're beautiful,' that's a huge compliment, but that doesn't… The way that I look doesn't define me, and I don't think that that's how metal was first brought into this; it's not about how you look. And we definitely don't use it as a weapon. To us, it's just fun to just get up there and be who we are. I mean, if you see us on stage, we're not out there, like, 'Hey!' [shakes her chest]. We're out banging our heads, we're jumping… We're doing stuff that boys do."

Carla: "We grew up as misfits, and, for us, when we found metal music, it was a place for misfits to go. You know, if you weren't the popular kid, if you weren'the pretty girl, all the metalheads, they took you in anyway; they didn't care what you looked like. So it always makes me laugh when the metalheads now say, 'Oh, they can't play metal. They're too pretty.' It's, like, wait a second. When I was a kid, I found metal because it didn't matter; none of that stuff mattered. But, at the same time, we're not afraid of sexuality, we're not afraid of who we are, we're not afraid of how we look. We don't really care. If someone wants to judge us, screw them."

BUTCHER BABIES' second album, "Take It Like A Man", was released on August 21 via Century Media. The CD was produced by Logan Mader, who has previously worked with FIVE FINGER DEATH PUNCH, DEVILDRIVER, CAVALERA CONSPIRACY and GOJIRA.