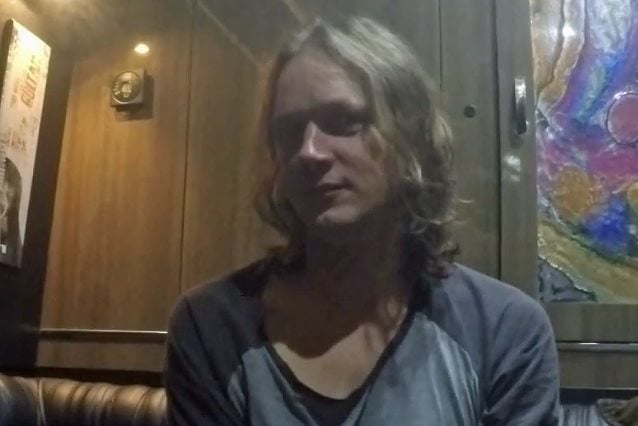 On December 7, Metal Wani's Jackie Mtz conducted an interview with bassist Henkka Seppälä (a.k.a. Henkka T. Blacksmith) of Finnish metallers CHILDREN OF BODOM in Phoenix, Arizona. You can now watch the chat below. A couple of excerpts follow (transcribed by BLABBERMOUTH.NET).

On how things are going with current CHILDREN OF BODOM touring guitarist Daniel Freyberg (NAILDOWN, NORTHER) and whether Daniel will be part of the songwriting process for the band's next studio album:

Henkka: "Things are going good with him. He's a great guy. He's a good player. It's really, really fun to tour with him, so we're glad we have him. Actually, I don't know about the writing, because we are still under the old record deal, and he's not part of that deal. So I don't know how we should do it [legally]. But he will definitely be part of when we are rehearsing the stuff and definitely will be part of the next tours as well. But we still have to find out how do we make all the legal parts for the next album, because it's still part of the old record [deal]."

On whether the addition of Freyberg has been a "breath of fresh" for CHILDREN OF BODOM:

Henkka: "It's definitely a fresh air, of course. Because we've been touring [for] so long with the same members, so it's always… even just one guy changing, he always brings… Kind of like you see everything with new eyes yourself too, so it's really, really nice."

On CHILDREN OF BODOM's upcoming "20 Years Down & Dirty" European tour celebrating the twentieth anniversary of their debut album, "Something Wild":

Henkka: "We will not play ['Something Wild'] in its entirety; we will just bring a lot of songs from the album… a lot of songs we haven't done before. We haven't still decided the setlist. We will also concentrate on [songs from] 'Hatebreeder' [1999], so it's gonna be this old, old stuff… We'll just have, like, a long headliner set, and then maybe half of the set is gonna be just old [songs]."