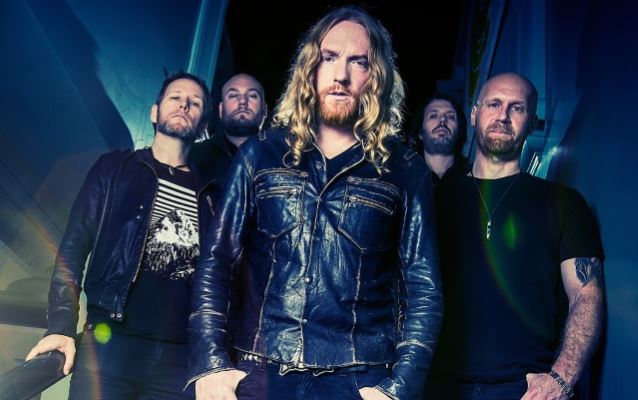 On January 16, Josh Rundquist (a.k.a. That Drummer Guy) conducted an interview with drummer Anders Jivarp of Swedish melodic death metallers DARK TRANQUILLITY before the band's performance at the Triple Rock in Minneapolis, Minnesota. You can now listen to the chat in the YouTube clip below.

Speaking about the progress of the songwriting sessions for DARK TRANQUILLITY's follow-up to 2013's "Construct", Anders said: "Myself and our keyboard player [Martin Brändström] have been writing ever since June. Pretty much three times a week we meet up in his studio and just write, so we have a lot of material — actually, almost six [or] seven songs done. Not with guitar solos and vocals, but it's there. So we said we're gonna spend… After this [North American] tour, we're kind of done [with the 'Construct' album cycle]. We're gonna do festivals and stuff like that, but we're gonna concentrate, in a really slow tempo, on just releasing a really, really good album. And I think we can do that, I'm pretty sure."

He continued: "We're talking about recording the album in October [and] November, [and it makes] sense to release it in maybe March [or] April [of 2016]."

Regarding the musical direction of the new DARK TRANQUILLITY material, Anders said: "I've been writing, like, 95 percent of it. It's very guitar oriented. It's very… I'm surprised, actually, how a drummer and a keyboard player can create so many guitar riffs. 'Cause 'Construct' was a little bit different; it was more… [It didn't have] too many guitar riffs necessarily. But I would say it's gonna surprise a lot of listeners. Maybe they wil say, 'Oh, [it sounds like] old DARK TRANQUILLITY,' with so much guitar riffs and stuff. It's a little bit towards that direction, I dare to say, even if it's not… I played some of the songs for Niklas [Sundin], our guitar player, and he was, like, 'Woah! Fuck! What's this?' [Laughs] So… We'll see. No ballads so far. I'm very happy with it."

He continued: "I'm surprised, actually, that me and Martin could do that, actually. 'Cause I was… When I started writing, I was, like, 'Hmm… How is this album gonna sound? Maybe like ANATHEMA [and] OPETH… This mellow, soft…' You know?! 'Cause I like that. But when I started writing, it was, like… no. This is what I've got. All this fast stuff. So… Maybe the album after that will be the slow one. We'll see."

DARK TRANQUILLITY's tenth studio album, "Construct", was released on May 27, 2013 via Century Media Records. The CD was mixed by Jens Bogren (PARADISE LOST, OPETH, KATATONIA) at his Fascination Street studios in Örebro, Sweden.

DARK TRANQUILLITY filmed a music video for the song "Uniformity" in April 2013 with Patric Ullaeus of Revolver Film Company, who has previously worked with DIMMU BORGIR, LACUNA COIL, IN FLAMES, SONIC SYNDICATE and KAMELOT, among others.