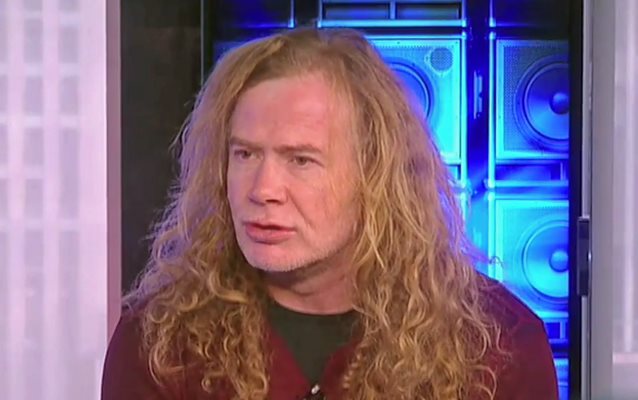 On December 14, MEGADETH mainman Dave Mustaine was interviewed by Laura Ingle, the New York-based correspondent for the Fox News channel. You can now watch the chat below.

Speaking about Fox News commentator Bill O'Reilly, Mustaine said: "I love Bill O'Reilly's outlook on life. He kind of plays it right up the middle. I don't know that I'm that much like him, but he's helped me have a lot of open-mindedness towards things that I was previously not as open-minded to."

He continued: "When my life changed and I got saved, people were telling me, 'Oh, now you're a Republican.' It's, like, no, I'm not. I'm an independent, man; I go right up the middle. And there's just a lot of things, stigmatisms people say come along with what you believe, or how you believe. And there were several things that he said that has gone contrary to my previous beliefs that I thought, 'Wow, that's a whole new paradigm.' And it's opened my mind."

Mustaine made headlines in early 2012 when he voiced his support for ultraconservative Republican presidential candidate Rick Santorum. He explained at the time that the Pennsylvania politician looked "like he could be a really cool president… kind of like a JFK kind of guy." That same year, he drew ire on social media when he suggested onstage at a concert in Singapore that President Obama was behind the mass shootings in Aurora and at a Sikh temple in Wisconsin.

Mustaine later blamed media outlets for taking his statements out of context, explaining that never said he officially "endorsed" Santorum. As for the Singapore concert, he claimed to have been repeating the theories of Larry Pratt, a pro-gun activist who runs the organization Gun Owners Of America.

Also in 2012, Mustaine revealed his "birther" opinions on a talk show, saying he doubted President Obama was born in the United States. He told radio host Alex Jones: "With all of the proof about his birth certificate being fake… And you see the signs in Kenya that say 'the birthplace of Barack Obama.' Hello?! C'mon, guys. How stupid are we right now?"

Mustaine has consistently denied that he is a Republican, telling Artisan News in a 2012 interview: "I'm an independent, not a Republican — I've never been a Republican. I've always said that. I don't belong to any party — I'm non-partisan. And for me, the sad thing is, instead of voting for the best man, I have to vote for the lesser of two evils."