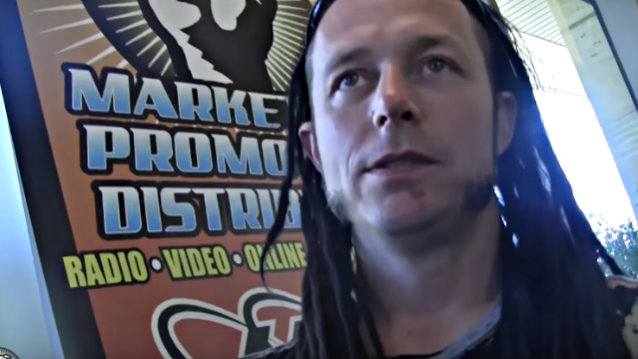 DISTURBED and ART OF ANARCHY bassist John Moyer was recently interviewed by IndiePower. You can now watch the chat below.

Speaking about DISTURBED's plans for the immediate future, Moyer said: "We just finished a fourteen-month run off of 'Immortalized'. The next thing I'm looking forward to is a little bit of a break. But, you know, the game plan is yet to be decided."

Prior to the arrival of 2015's "Immortalized", DISTURBED had been on hiatus since the fall of 2011, after completing the touring cycle for its previous studio effort, "Asylum", and issuing a rarities collection called "The Lost Children".

"That's what we've always said: It's okay to take a break and let people miss us," Moyer explained. "Granted, we took a five-year hiatus, which is a little long. I don't think we wanna do that again. And it's chance you take, 'cause if you wait too long, it could be risky, 'cause you don't know if your fanbase is gonna stay there and be there when you come back. And, man, it worked out great. We came back stronger than ever. Fans of ours that had never seen us before, they had been listening to us for three or four years… There's fans of DISTURBED that started becoming fans in their freshman year of high school and didn't get to see us until after they graduated, but they had been listening to songs; it was part of their life, the soundtrack to their life. And so not only did DISTURBED come back and have the blessings of our old fanbase who were missing us but then all these new fans who had never seen us and been turned on to us over the last three or four years that we had been gone were there too. It was pretty powerful."

Singer David Draiman revealed in February that DISTURBED's acoustic EP will be released before the band begins work on the follow-up to "Immortalized".

"Immortalized" became DISTURBED's fifth album to enter The Billboard 200 chart at No. 1 — a feat shared only with METALLICA and DAVE MATTHEWS BAND.

ART OF ANARCHY issued its sophomore album, "The Madness", on March 24.