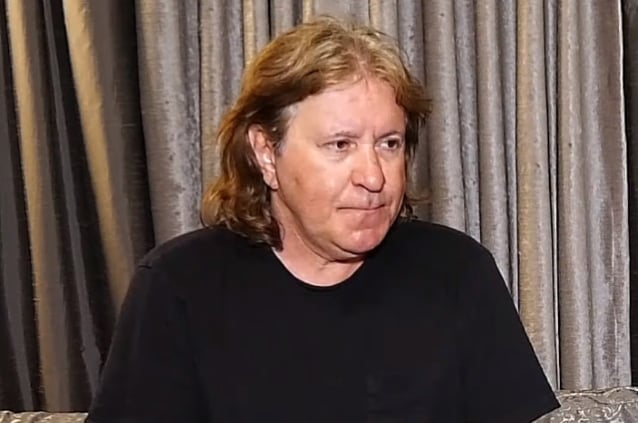 Former UFO drummer Simon Wright says that he was very sad to hear about the passing of the band's guitarist/keyboard player Paul Raymond this past April. "That was a shock," he told "The Blairing Out With Eric Blair Show" (see video below). "That really was. I was actually gonna meet up with Paul. They [UFO] were taking a break and then coming to America, and I was gonna meet up with him in L.A. And I just looked at [the report of his passing], and I went, 'Oh my God! You're kidding me.' That was a great loss. He was such a talented multi-instrumentalist. When I was in UFO, me and him used to hang around a lot, and we became good friends. It's such a shame."

Speaking about UFO singer Phil Mogg's decision to call it quits after completing the band's 50th-anniversary tour, Wright said: "I respect that. He's made his own decision — it's his decision and stuff — and he's doing this last tour. And he's laid everything on the table, so to speak. So I respect that. He's a real gentleman about things and his way and stuff. I always found him a really cool guy; he always was. He was always forthright. And I hope he has a nice retirement; I really do. I think he's deserved it."

Wright joined UFO in 1995 as the replacement for Andy Parker, who decided to leave the band to help run his family business rather than tour. Simon played with UFO, on and off, until 1999.

Simon, currently of DIO DISCIPLES and also known for his work in DIO and RHINO BUCKET, lasted in AC/DC for six years. Wright, a then-unknown drummer whose first credits included Manchester, England metal outfit A II Z, joined AC/DC in time for the touring cycle for "Flick Of The Switch" and played with the Australian rockers throughout the '80s before leaving to hook up with DIO in 1989.