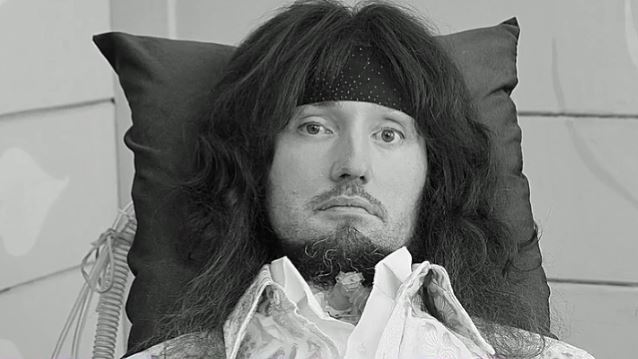 Jason Becker, the guitarist/composer who has had amyotrophic lateral sclerosis (ALS, aka Lou Gehrig's Disease) for over 27 years, has taken to Facebook to speak out against the Senate health care bill.

"I usually stay out of politics, but people have asked me whether the American Healthcare Act (AHCA), if passed by the Senate, will affect me personally," he wrote. "I'm about music, not politics, but the fact is this one has me freaked out for poor and disabled people.

"I have survived ALS to continue my work as a musician and composer for 28 years due to the care I receive through insurance and Medicaid. Without these supports, my family can flatout not manage my care and my life and career will be in serious jeopardy."

Medicaid covers roughly two-fifths of Americans with disabilities and one-fifth of Americans overall. The nonpartisan Congressional Budget Office estimated Monday that Senate Republicans' health-care bill, the Better Care Reconciliation Act, would slash Medicaid spending by $772 billion over the next 10 years. That would mark a 26 percent cut in spending on Medicaid by 2026, compared to under the the Affordable Care Act.

Becker continued: "When President Trump promised we would get better, cheaper health care that would fix the problems of the Affordable Care Act, I hoped it was true. Unfortunately, the American Healthcare Act promises giant cuts to the programs that I and every other poor, sick and disabled person have relied on for our lives.

"The Medicaid per capita block grants to states will mean bluntly that people with costly needs like mine will be too expensive to cover. The removal of limits on insurance premiums means that people with expensive medical care needs can be priced out of the market. I would certainly be one of those affected.

"Lastly, insurance companies will not be required to cover basic services, such as hospitalization. This means, for example, the next time I get pneumonia I would not be able to afford the intensive treatment I would need to survive it.

"None of these reductions in benefits is offset by any other aspect of the bill. The only beneficiaries of these drastic cuts are the wealthy, who are set to receive a tax break if the bill passes.

"It breaks my heart that this country could forsake its own most vulnerable citizens in this way, placing no value on the lives of the poor and sick. So I am asking you: please call and email your senators right away, telling them you want them to stand up for those who can’t by demanding a better solution for American healthcare and voting against the AHCA as it is currently written."

Becker was diagnosed with ALS at age 20, shortly after joining David Lee Roth's band for the gold-selling 1991 album "A Little Ain't Enough". Although the disease robbed him of his ability to play guitar — and eventually left him both paralyzed and unable to speak — Becker continues to compose music with the help of computers, collaborators, and a system of communication using eye movements that was devised by his father Gary.

Even after his once prodigious axe skills left him, Jason's music continued to earn the respect of his peers. Joe Satriani called 2001's "Perspectives" — Jason's first recorded work after losing his motor functions (originally self-released in 1996) — "a triumphantly powerful and beautiful album." Fellow virtuosos joined the chorus of praise, including Steve Vai, who said, "Jason has discovered a brilliant source of inspiration within himself. His deep soul searching has resulted in a body of music that reveals courage and insight and is deeply moving."

Jason's original partner in CACOPHONY, Marty Friedman added, "To call Jason a genius is an understatement. He doesn't cater to trend, target audiences, marketing gimmicks or anything like that. He plays out the emotions from his heart and makes real music that is a salute to the human spirit. Jason is a prodigy and on 'Perspectives' he realizes his miraculous potential."

For more on Jason Becker and his fight with ALS, go to www.jasonbeckerguitar.com.

I usually stay out of politics, but people have asked me whether the American Healthcare Act (AHCA), if passed by the...