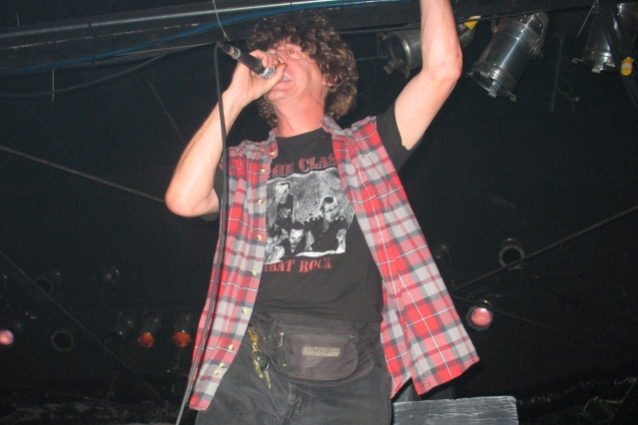 Perry McAuley, singer of the groundbreaking New Orleans band GRAVEYARD RODEO, has passed away in Evergreen, Louisiana. He was 58 years old.

Pioneers of the New Orleans underground scene, fusing metal, hardcore and doom that would later spawn the "sludge" sound which New Orleans has become famous for, GRAVEYARD RODEO's history dates back to 1980 when they formed in New Orleans under the moniker BOB'S BARBEQUE.

GRAVEYARD RODEO's demos "Realms Of The Undead" and "Cruelty To Animals" in the mid-1980s shook the underground with tracks such as "Nuke The Nation", "I Wanna Rot" and "Bad Seed". They were regular fixtures at such noted clubs in the area as Jed's, Muddy Waters, Rose Tattoo, Tipitina's, and the V.F.W. Hall on Franklin Ave alongside SHELL SHOCK and EXHORDER. The band would share stages with touring acts BLACK FLAG, D.R.I., BUTTHOLE SURFERS, DEAD KENNEDYS and CORROSION OF CONFORMITY, whose guitarist/singer Pepper Keenan was a member of GRAVEYARD RODEO prior to joining C.O.C. in 1988.

GRAVEYARD RODEO's Halloween shows were legendary, with "splatter films," throwing fish guts into the crowd and Perry being brought out in body bag, then rising up covered in blood at the beginning of the band's sets. In 1989, they were picketed by a local church group which found the group's flyer so offensive that the controversy was covered by local CBS affiliate WWL Channel 4 in New Orleans. (The resulting attention brought an even bigger crowd to GRAVEYARD RODEO's usually sold-out Halloween show.)

By 1993, Century Media had signed GRAVEYARD RODEO and released the band's debut album, "Sowing Discord In The Haunts Of Man". A European tour opening for SICK OF IT ALL followed.

GRAVEYARD RODEO was very well received all over Europe, with great press in all the heavy metal magazines of the time. This version of the band broke up upon its return home fron the road. A second version featuring new members released "On The Verge" the next year before calling it quits permanently.

Original GRAVEYARD RODEO drummer Wayne "Doobie" Favra later surfaced as the singer of CHRIST INVERSION and drummer for the reactivated NECROPHAGIA over the course of the 1990s and into the 2000s.

The "Sowing Discord" lineup reunited for one show in October of 2007 for the Raise The Dead Festival II in New Orleans at the Howlin' Wolf.

I found out that we lost our friend Perry McAuley. When I first went down to New Orleans in the early '90s, I was introduced to Perry by my mother Rita Patrick. He was in the band Graveyard Rodeo, so I assume him and mom met at a show. R.I.P. Uncle Perry. https://t.co/pUfsnmi5X9 pic.twitter.com/4aIKfJeyFl