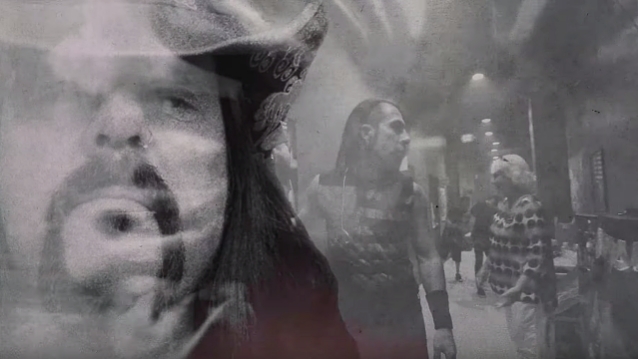 The official music video for the song "Skyy And Water" from HELLYEAH can be seen below. The Wombat Fire-directed clip features backstage and performance footage of the band's late drummer Vinnie Paul Abbott, who passed away more than a year ago.

"Skyy And Water" is taken from HELLYEAH's sixth studio album, "Welcome Home", which is being released on September 27 via Eleven Seven Music.

Like the last two records, 2016's "Unden!able" and 2014's "Blood For Blood", "Welcome Home" was recorded at The Hideout Recording Studio in Las Vegas, Nevada with producer Kevin Churko.

Vinnie Paul died in June 2018 at the age of 54 in his sleep at his home in Las Vegas. The official cause of death was dilated cardiomyopathy, an enlarged heart, as well as severe coronary artery disease.

HELLYEAH guitarist Tom Maxwell paid tribute to Vinnie on the first anniversary of the drummer’s death. Maxwell wrote in part: "I'm writing you this letter to tell you how much I miss and love you. Never could I have imagined you not being here with us anymore. There's so much all of us lost when you left us. Your smile, your infectious laugh, your always steadfast care of all those around you. Everything has changed now.

The guitarist continued: "Our family is just shards of what it used to be. It seemed like every day was harder then the one before it. It's hard just knowing that you're not here to lift everyone up and make everything better with just the simplest things you always used to do. It's hard waking up and trying to navigate through such murky waters. We're doing our best — some better than others, some not so much."

HELLYEAH's 18-city headlining summer outing kicked off on July 23 in Atlanta, and culminated in a special celebration on August 17 in Dallas, Texas.