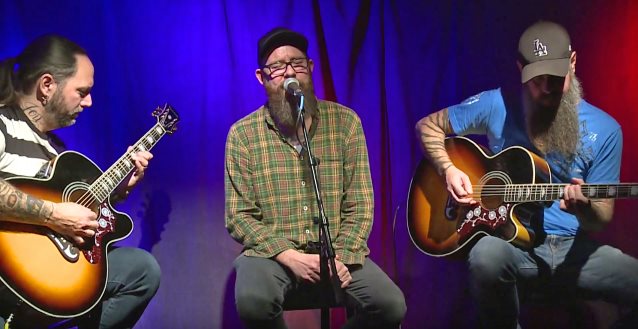 Anders Fridén (vocals), Björn Gelotte (guitar) and Niclas Engelin (guitar) of Swedish metallers IN FLAMES recently performed an acoustic version of their song "In My Room" at the HardDrive Radio studio. Check out video footage of their appearance below.

"Battles", IN FLAMES' twelfth studio album, was released on November 11 via Nuclear Blast in all territories excluding North America and Scandinavia and Eleven Seven Music Group in the U.S.

IN FLAMES drummer Daniel Svensson announced last fall that he was leaving the band to focus on his family life. He has since been replaced by Joe Rickard, who played on "Battles" as a session musician.

More recently, bassist Peter Iwers issued a statement last month saying that he would leave IN FLAMES at the end of the current U.S. tour "to pursue other endeavors." A replacement bassist has not yet been announced.