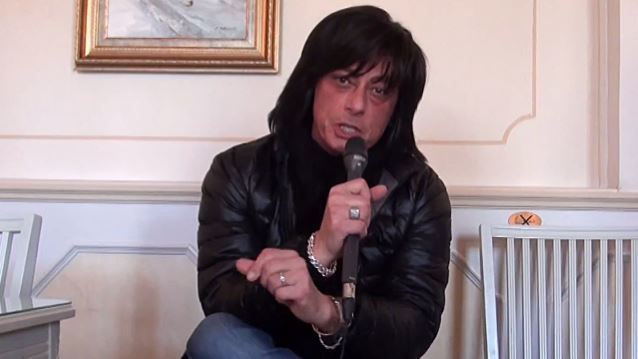 Kaaos TV conducted an interview with legendary hard rock singer Joe Lynn Turner (RAINBOW, DEEP PURPLE, YNGWIE MALMSTEEN) prior to his April 24 concert at Leipätehdas in Vaasa, Finland. You can now watch the chat below.

Asked about a possible reunion with RAINBOW leader Ritchie Blackmore, Turner said: "The real talk is that it's probable. We are talking, but we have not sat in the same room yet to discuss anything. And we could get in this room and we could say, 'Well, there's nothing.' We could get in this room and say, 'Well, there's this,' or, 'There's that,' or, 'There's a [RAINBOW] reunion,' or there's just a Blackmore-Turner album, or there's some remakes, or there's nothing at all. So we haven't gotten into that room yet. But we're talking, so there's fingers crossed."

Joe was the singer of RAINBOW between 1980 and 1984 and he sang on the album "Difficult To Cure", which featured the band's most successful U.K. single, "I Surrender".

During Turner's time with RAINBOW, the band had its first USA chart success and recorded songs that helped define the melodic rock genre.

Asked what memory from his time with RAINBOW particularly stands out, Turner said: "The first year we played Madison Square Garden in New York City. That's my hometown. So when you play to 25,000 people at the Garden, you really have arrived, and my family and friends were there. So it was really a big occasion for me. That's what the special part of it was. The memory of that is huge. I mean, I played bigger stadiums and everything else after that, but that meant a lot to me, because I used to go see the acts there myself."

According to Turner, previous attempts to put RAINBOW back together fell apart because Blackmore wanted to focus on his band BLACKMORE'S NIGHT, which is fronted by the guitarist's wife, Candice Night.

After Blackmore's final departure from DEEP PURPLE in 1993, he resurrected RAINBOW before focusing exclusively on BLACKMORE'S NIGHT.