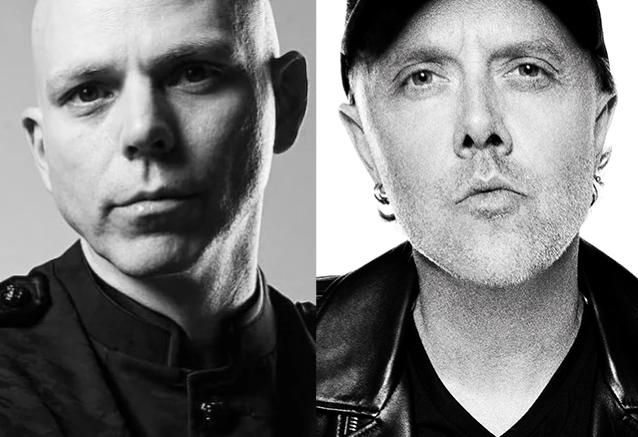 STONE SOUR's Josh Rand has defended Lars Ulrich, saying the METALLICA co-founder is a "great" drummer who does "unique things" behind the kit.

Despite the fact that it's become fashionable to dump on the METALLICA drummer's skills, Rand says that he has always had a tremendous amount of respect for Ulrich.

"Here's the thing. They're my favorite band," Josh told Australia's Heavy (as transcribed by BLABBERMOUTH.NET). "He takes a lot of shit from everybody. For one, it's not like he's a spring chicken anymore — let's be honest. I mean, he's starting to get up there [in age]. They play for two and a half hours. They were road dogs for how many years now and how many shows. And everybody [goes], 'Oh, this and that.' He still had to record those songs. So even if you wanna make the argument of, 'He struggles now to play this or he plays that,' I'm, like, he still wrote it 30 years ago. And back then, there was no Pro Tools, so he had to play it."

Josh added: "I think he's a great drummer. I think he does several unique things in his style that nobody else does that always stuck out to me."

Last year, Ulrich said that he was no longer bothered by people's criticism of his drumming abilities, telling METALLICA's So What! fan-club magazine: "I'm so over — I'm literally immune to it. We just did a bunch of interviews, and sometimes, if I am being interviewed by a journalist who is also a fan, they'll say, 'When people say Lars Ulrich is a shitty drummer, I defend you.' Which is cool, but I've got to tell you, 20 years later, 30 years later, it just doesn't register anymore. I am so comfortable with who I am, I'm so comfortable with who METALLICA is, I'm so comfortable with our place in all of it. I've got an incredible wife, three great kids, my dad and [his partner] Molly, incredible friends, and lots of cool acquaintances. It's all good. I've got nothing left to prove, so it just doesn't register anymore."

Back in 2016, Ulrich, who has gotten a lot of flak over the years from people who accused him of being a poor drummer, told the "Talk Is Jericho" podcast that he went through a period in the mid-1980s "that probably culminated in the 'Justice' album where I felt sort of compelled to try to show ability." According to Lars, part of the reason for him feeling insecure about his abilities was the increased competition from some of his peers.

"Listen, when you've got Dave Lombardo and Charlie Benante breathing down your back, it was, like, 'Okay, I've gotta…' I tried to step it up a little bit and tried to do my own thing and do all this crazy shit," he said. "I was trying really hard to push the drums kind of into the foreground. And then, after like a year or two of that, I was, like, 'Okay. Seriously? Just do your thing. Chill out. Support the riffs. Do what's best for the song.' So since around I guess the late '80s — so I guess it's been, like, 25 years now — the only thing that's really interested me is just doing the best thing for the song."

Asked in a 2008 interview with U.K.'s Rhythm magazine if he was troubled by the fact that he's gotten a lot of flak over the years from people who accused him of being a poor drummer, Lars said: "It used to, back in the day — and I spent a lot of time overcompensating for that on the early records. But then you wake up one day and you're like, whatever. It hasn't bothered me for [many] years. I'm no Joey Jordison, I'm no Mike Portnoy, and I have nothing but love and respect and admiration for all those guys. When I hear some of the young dudes, they blow my mind with what they can do with their feet and stuff — but it's not something that makes me go, 'I need to feel better about myself so I'm gonna learn how to do what they do with my feet.' I'm not a particularly accomplished drummer but I am very, very, very good at understanding the role of the drums next to James Hetfield's rhythm guitar. I guarantee you I'm the best guy in the world for that, and that's enough for me!"

In a 2012 chat with DRUM! magazine, Ulrich stated about his playing ability: "I usually feel like I've regressed. [Laughs] I'm like, 'Why can't I do that anymore?'" He continued: "I can't say that I necessarily sit down to practice, like, 'I'm going to play and practice so I can get better.' What happens is that I just sit down and kind of play to just more stay in shape."

Ulrich added: "You know, METALLICA was up to two or three months off [in 2011], and I would sit down, I have an iPod next to my drums so I can play along to all kind of crazy stuff, and try to see if I can land in the same zip code of some of that stuff occasionally. But I can't say that I sit down to necessarily practice to sort of get better. For most of my stuff, it's about listening and about interpreting stuff that I'm listening to. So all the kind of sitting down and, you know, 'Now I'm going to do thirty-second-note paradiddles standing on my head — you know what I mean? I don't do that kind of stuff so much. For me it's more about the regimen of staying in shape, running every day, eating healthy, you know, being on top of that side of it."