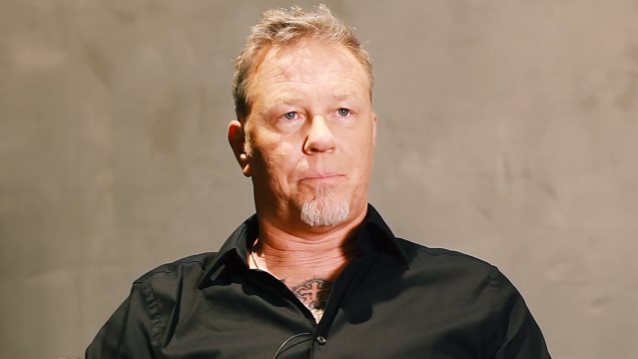 Deezer recently conducted an interview with METALLICA frontman James Hetfield. You can now watch the chat below. A couple of excerpts follow (transcribed by BLABBERMOUTH.NET).

On the songwriting process for METALLICA's "Hardwired… To Self-Destruct" album:

Hetfield: "This album was something that was probably the easiest album made, I'd say, and also within that care of METALLICA, there's a kind of a… 'we don't care to be too careful with the music.' Obviously, you want songs that are the best and are great, and we're not gonna do anything that's less than great in our minds, 'cause we're harsh on ourselves. But also a fun feel to it, and it came easier than most of the others."

On keeping up with technology:

Hetfield: "We love exploring. There was a time when we were very afraid of it. And what does it mean to us, our craft? How do we do this? But now we undersand that, gosh, our main objective is to write music that we love listening to and to get it to people. So there's many, many ways to get music to people now — whether it's traditional album, CD or on the Internet or YouTube or in movies or video games. I mean, there's so many ways to get your music there. We're embracing it and trying to understand it more every day. Technology is very fast, and I think the most exciting part is that we own our own music now, and we can do what we want. There's so many choices, and you can get very creative on how to do that. So it's exciting for us."

METALLICA is expected to embark on its first U.S. tour in more than seven years in 2017.

The band wil be touring in support of its tenth studio album, "Hardwired... To Self-Destruct", its first all-new studio effort in eight years.

The album went to No. 1 in 58 countries, including the U.S., where it topped the Billboard 200 album chart.

METALLICA will break for the holidays before heading overseas in January for shows in Asia, Europe and South America. The North American run is likely to start sometime in the spring.