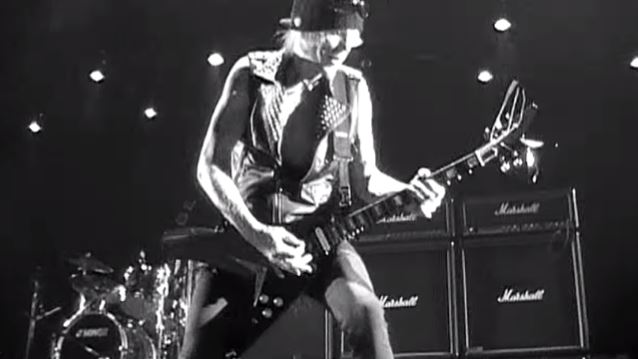 "Spirit On A Mission" features twelve 12 classic rock guitar-driven songs that highlight Schenker's distinctive and dynamic guitar playing, valiantly underpinned by the ferocious rhythm section of Rarebell and Buchholz, the same rhythm section that originally performed together on the SCORPIONS' 1979 album "Lovedrive".

The official video for the song "Live And Let Live" from "Spirit On A Mission" can be seen below.

Michael remembers how he came up with the name of the new album: "A while ago I was asked how I wanted to be remembered, and I said 'as a spirit on a mission, spreading the joy of music from a place of pure self expression.'"

Scottish vocalist Doogie White, who co-wrote the album with Schenker, soars across every song, and stamps his personality with every note and phrase, while Wayne Findlay adds a new level to Schenker's classic sound with his Dean seven-string guitar and keyboard arrangements.

"Spirit On A Mission" is a rapturous, explosive collection of brand new songs steeped in shades of dark and light. Musically and lyrically, the new album shows a re-energized guitarist at the top of his game, surrounded by some of the best musicians in rock.

The new album was recorded at Kidroom Studios in Münster, Germany; the same studio where 2013's "Bridge The Gap" album was laid down. The CD was produced by Michael Voss and Michael Schenker, and engineered by Voss.

"After the 'Bridge The Gap' Japan tour in March 2014, I started to put new material together for what was to become the 'Spirit On A Mission' album," says Schenker. I went to the recording studio in June 2014 to put down the song arrangements and we finished recording in November."

"Yes, we got robbed [some guitars and some music] and got very upset about it," recalls Schenker. "Fortunately, it was just performances and not compositions. We caught up and performed the music better than before. It forced us to work extra hard and longer but it made it stronger."

For Schenker, the songwriting and recording process for "Spirit On A Mission" was very different from the 2012's "Bridge The Gap" album.

Says Schenker: "I already knew ahead of time that I wanted to take 'Spirit On A Mission' to the next level by adding more seven-string guitar on some songs to get more of the low heavy sound, and on other songs to keep it very fast and energetic with melodic vocals and a couple of mid tempo's with more of my writing like in my UFO days."

"Doogie did an amazing job with his melodies and singing," adds Schenker. "Even though we had our instruments, music and equipment stolen from the recording studio, we had to re-record a lot of his vocals again, but when we did it the second time around, it got even better.

"I asked Wayne to come up with a few cool guitar riffs on his seven-string. I added my parts to it and the outcome was very unique. Again, with the addition of Doogie's vocals, we entered a whole new place that was an extreme pleasurable experience."

The writing process and overall concept for "Spirit On A Mission" proved to be a fulfilling experience for Schenker and his band.

Says Schenker: "I always write in the same way but this time, especially driven by a precise concept. The picture was album balance for me and combine many years of emotions in one. I wanted lots of double-bass drum to keep the fast songs rolling like a train with lots of energy covered with interesting elements, a couple of my UFO days-type of mid tempos and the seven-string low sound to get a very wide range of sounds and emotions."

Michael's TEMPLE OF ROCK shared ideas and collaborated in a bigger way on the new album.

"All songs were co-written by Doogie and myself, "recalls Schenker. "Wayne co-wrote five songs. I originally wanted to write the album as a group effort, but I had this concept that needed to be focused on differently. However, Herman and Francis did very well by adding their amazing 'Rock You Like A Hurricane' rhythm section parts that gave it all it needed."

"Wayne has been with me (MSG) since 1999," says Schenker. "In 2004, I met Dean Guitars and they built me a seven-string. I played it for a while but thought it was too much of a sidetrack from what I was doing."

"I always liked that low sound and asked Wayne to look into developing it on the seven-string. A couple of years ago we started to use a bit of Wayne's seven-string guitar on 'Bridge The Gap' as a slow introduction. Wayne looks like a Neptune (Ocean God) and he loves the ocean. I saw this as an opportunity to have Dean build him a Trident Guitar in order to make his character complete. I wrote a little piece about Wayne called 'Neptune Rising' on the 'Bridge The Gap' album, and now on 'Spirit On A Mission', Wayne was ready to co-write five songs, and has now become an essential part of TEMPLE OF ROCK."

"Coincidentally," says Schenker, "former SCORPIONS members Herman Rarebell and Francis Buchholz and myself were out of the loop of rock 'n' roll around the same time, but for different reasons. When we recorded 2013's 'Bridge The Gap' album, we had not played together since the SCORPIONS' 'Lovedrive' album (1979). 'Sprit On A Mission' is the second TEMPLE OF ROCK album to feature the former SCORPIONS rhythm section.

Former RAINBOW singer Doogie White is described by Schenker as an "extremely creative individual with a fantastic range and a voice that never stops". "How many people do you know that can sing nine shows in a row, without a day off and still have a voice with a range like his?" says Schenker. "He's a real trooper."

What are Schenker's favorite songs from "Spirit On A Mission", and why?

Says Michael: "I love 'Live And Let Live' because it has everything. I love 'Vigilante Man' because it's heavy and melodic with a great tempo and sound. 'Something Of The Night' turned out to be a fantastic outcome especially with that spooky Howler sound I developed awhile ago. 'Saviour Machine' is an epic. 'Rock City', 'Bullet Proof', 'Restless Heart' — I love the fast melodic stuff, and the other seven-string songs with a touch of '70s rock."

What are Schenker's overall plans to promote the new album? Does he plan on touring the album by relentless touring and playing summer festivals?

"Promotion is definitely the next step," says Schenker. "and tour-wise, including festivals, we will play wherever we can to promote 'Spirit On A Mission'.

"I want to make TEMPLE OF ROCK its own entity. Right now it is still using the Michael Schenker platform but eventually I want it to stand on its own feet as 'TEMPLE OF ROCK'."

"Spirit On A Mission" track listing:

All songs are written by: 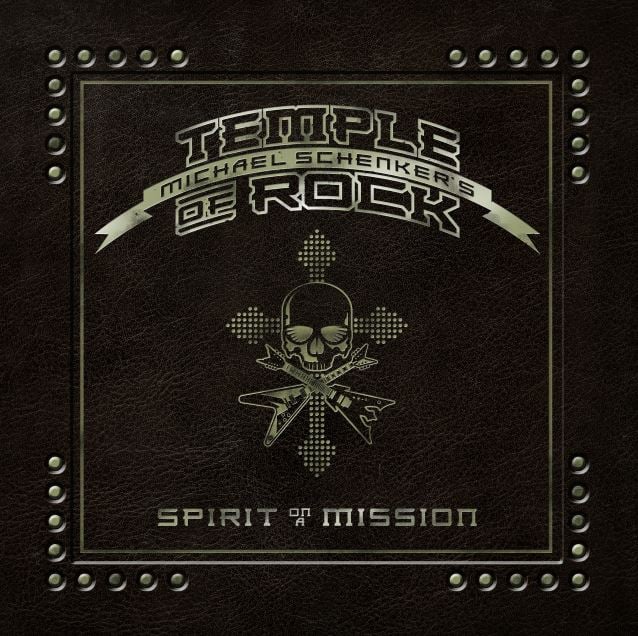