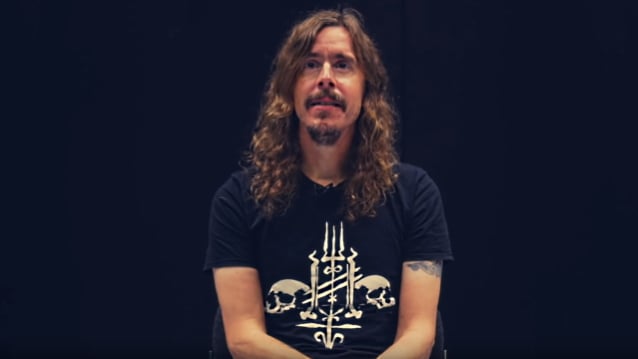 In a recent question-and-answer session posted on the YouTube channel of Nuclear Blast Records, OPETH mastermind Mikael Åkerfeldt was asked how annoying it is for him to constantly get questions about his decision to drop the "growling" vocals from the band's albums. He responded (see video below): "Well, it's not annoying. I get that question a lot from fans and journalists. Journalists are a bit more careful, diplomatic. They don't tell me, like, 'You suck now. You should do that.' But in contrary to what people think, I'm happy to get that question, because that means that that stuff meant a lot to people. And now it's, like, eight off years since we recorded a record that had those screaming vocals on. That's a long time people are clinging to, and they still haven't gotten over the fact that the last four records don't have screams. And I guess that means I was great… I guess I was good. I guess it meant something, and that makes me happy.

"People who like that stuff, they have to understand that you change and the music changes, and you get other influences," he continued. "I haven't really consumed death metal music… I mean, the last death metal record I bought with my own money and enjoyed was 'Domination' by MORBID ANGEL, and that's, like, '95. Our first album came out in '95, and at that point, I was still into that death metal — whatever scene we were part of — finding our feet, and I wanted us to be that band and have both the screaming vocals and the clean vocals. But even then, I wanted to add more clean vocals; it was just that I didn't dare to — I didn't have the confidence to sing more clean. And with more record, there was more and more and more and more, and then you end up where there's no screams, because of, I guess, confidence.

"I haven't listened to a death metal record that actually pushed me to write something or inspired me," Mikael added. "That scene reached a moment where it stopped developing, to me. It was as fast and technical as it could be. And also, a lot of people don't understand that my death metal that I listen to is pure. I will not listen to a death metal band that sounded like us; it's not my cup of tea… My death is MORBID ANGEL, ENTOMBED, DEATH, BATHORY, OBITUARY — that stuff. That's pure — no frills. That's what I like. MORBID ANGEL, of course, up to 'Domination', when [David] Vincent left, and Vincent is the greatest death metal singer of all time. It was like WHITESNAKE without David Coverdale, if you know what I mean. It doesn't work. I'm not interested. And the melodic [death metal] scene in Sweden was never really interesting to me, with the exception of AT THE GATES, who kind of, I think, started that melodic death metal scene. [They're a] great band, but I don't consume that music anymore — I don't find it interesting, really, to be honest. And if I hear something that I think is good, then it's retro — like OBLITERATION from Norway. It's pure death metal. I'm not sure what's new about their music, but, yeah, that's the stuff I like — rootsy death metal. So, yeah, I still listen to that every now and when I had a couple of beers or something, for nostalgic reasons, but it doesn't inspire me, and it hasn't for a very, very long time. And that's why I stopped after 'Watershed', because 'Watershed' was the pinnacle to that style for me. And it's kind of well-known fact that I tried to make a 'Watershed 2.0', or whatever, that was then deleted. And 'Heritage' was born, and with that a new path for us. And I wanted to see what was around the corner there. And it's because I'm a musician and I love music. We're not entrepreneurs or businessmen. I mean, we make the worst business decisions ever, and already on the creative level. I mean, our new album, for instance, is the longest one we've ever done and it's sung in a language that only Swedish people can understand. It's a bad decision. We go against the grain. It's like fashion — we sometimes find ourselves being fashionable. But because we always had the same mindset — that the world will outrun us and we have to wait for the circle to be full and then we'll be fashionable again. So we always follow the gut feeling, and wherever you're at at the moment, that's what matters. Not catering to your previous success — that's not interesting to me. Unless that's what I wanna do in music, and it's not right now. I don't wanna do 'Watershed 2.0'… We still play those songs live. It's not that I'm ashamed [of it] — I love it. But yeah, I've moved on. And so should you."

OPETH's 13th album, "In Cauda Venenum", was released on September 27 via Moderbolaget / Nuclear Blast Entertainment. Recorded last year at Stockholm's Park Studios, the disc was made available in two versions, in both Swedish and English languages.