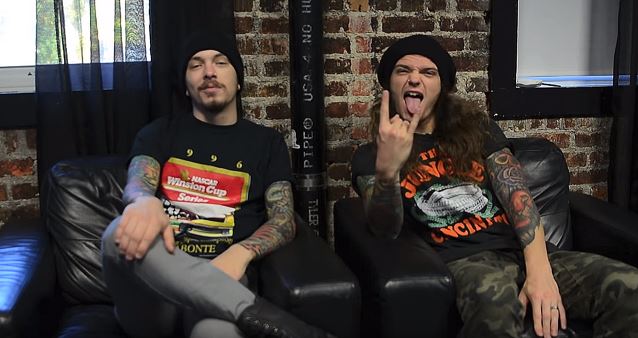 Pure Grain Audio ran through some of its "Most Extreme" questions with MISS MAY I vocalist Levi Benton and bassist Ryan Neff when the band was in New York this past fall. You can now watch the chat below.

MISS MAY I's latest album, "Deathless", was released on August 7 via Rise Records. The CD was produced by Joey Sturgis (OF MICE & MEN) and Nick Sampson (ASKING ALEXANDRIA) and was recorded at The Foundation Recording Studio in Connersville, Indiana. The band's fifth record follows their 2014 breakout, "Rise Of The Lion", which debuted at No. 21 on The Billboard 200 chart.

MISS MAY I's new record is not only a turning point for the band's career, it's also a return to form. Since their inception in 2007, they've steadily amassed a worldwide army of fans with four records, the last three of which have charted higher with each consecutive release. With "Deathless", the band has never sounded more aggressive while remaining as accessible as always.