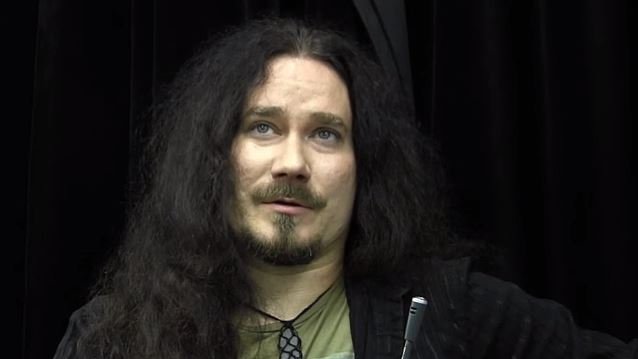 On December 16, Geeks Life Luxembourg conducted an interview with keyboardist Tuomas Holopainen of Finnish-based symphonic metallers NIGHTWISH. You can now watch the chat below.

Speaking about NIGHTWISH's collaboration with evolutionary biologist Richard Dawkins on the band's latest album, "Endless Forms Most Beautiful", Tuomas said: "Well, I had one of those huge 'fanboy' moments, which I very rarely get anymore, when I met him for the first time a little over a year ago, when we recorded his part for the album in a studio in Oxford. I've been a fan of his works, his books for years and years. And [he was] a major inspiration for the new album as well. [He is] one of my true heroes, and meeting him was quite something. And he's a true English gentleman. He has the mind the size of the whole cosmos, and it was just such a great honor that he actually agreed to come. And we're gonna meet him in three days in Wembley as well; he's gonna come and see the show. I'm very excited. The whole band is very excited. I mean, we all are more or less fans of his works."

Holopainen also talked about the subject of human rights and the significance it holds for NIGHTWISH. He said: "There is a sort of connection with human rights, and, actually, the rights of all living things on our new album. We had a lot of long and very fruitful dicsussions with the band on our little NIGHTWISH summer camp two summers ago, and it opened a lot of our eyes. We wanted to make a slight statement on the new album, but we wanted to also do it in a very subtle way, because too much… how would you say? Like, preaching or going too aggressively towards things is never a good thing. So this album was our little effort of maybe making people think and giving some food for thought."

NIGHTWISH's "Endless Forms Most Beautiful" world tour kicked off in April this year in North America and the band has played sold-out shows in the U.S., Canada, South America and throughout Europe. The 2016 leg of the tour sees the band head to Australia, Asia and North America once again with a main-stage slot also announced for Donington's Download festival in June.

NIGHTWISH recently released a strictly limited (no reprints!) special tour edition of its current album, "Endless Forms Most Beautiful". The tour edition comes with a bonus DVD of live performances, documentary footage and promo videos as well as a huge photo gallery.

NIGHTWISH has announced a 26-date headlining tour of North America for 2016, launching in Sayreville, New Jersey on February 19, hitting six Canadian cities plus Pittsburgh, Anaheim, and New Orleans, then closing out in Tampa, Florida on March 23. Support on the tour will come from Dutch symphonic metallers DELAIN.