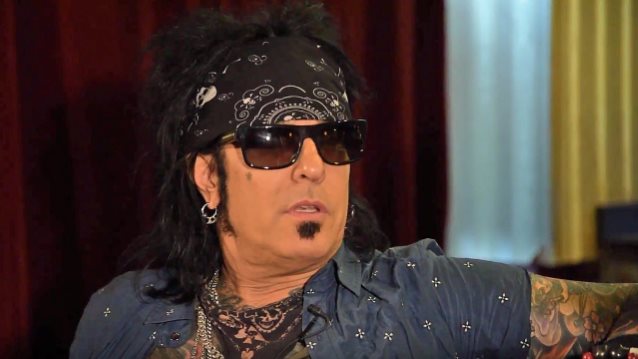 MÖTLEY CRÜE and SIXX:A.M. bassist Nikki Sixx has defended Chris Cornell over reports that the SOUNDGARDEN frontman may have killed himself after taking more of an anti-anxiety drug than he was prescribed.

Cornell apparently committed suicide by hanging on May 18 after SOUNDGARDEN played a show in Detroit. He was 52 years old.

Cornell's family issued a statement questioning whether his death by hanging was intentional and if "substances contributed to his demise."

The family's attorney, Kirk Pasich, said in a statement that the family would await the toxicology results to see if Ativan — the anti-anxiety prescription drug Cornell was taking — or other drugs contributed to his death.

During a recent episode of his "Sixx Sense" syndicated radio show, Nikki commented on Chris's passing, saying (hear audio below): "There's been so much news and information floating around about Chris Cornell and the fact that he was dealing with anxiety. And we don't know yet, but he might have taken too much of his anxiety medication.

"I was just thinking about anxiety in general," he continued. "And I think anxiety can be a good thing — it can get you do to stuff. If you're a songwriter and you know you have a deadline, you might feel anxious and it might push you. Or if you have a job, you have to get out the door and be on time. Or you're in college, you might have anxiety about tests etcetera. So it can be a good thing. It can also be crippling. I know that when I got off the drugs in the '80s, I had lots of anxiety, 'cause my body kind of hadn't found a balance yet. So things gave me anxiety. It probably sounds funny to some people, but going to the gas station, going to the grocery store… I was doing things outside my norm. I was used to just being high on drugs and being in this bubble of being on the road, and all of a sudden, I was off the drugs and I wasn't in the bubble and I was at home and I was having to do everyday stuff… And I used to feel really nervous and really anxious about that."

Sixx added: "It just had me thinking about Chris and how somebody that's so talented and that's been in this music business for so long, performing and traveling and seeing people. He had gotten clean and sober, and he was trying to deal with the anxiety. I think anxiety is something a lot of people deal with, whether it's a little bit or a lot. And these medications, like if you have a sleep issue and you take something to sleep, too much of that will kill you, too much of this stuff. It's scary.

"Why did he take too much, if he did? Was he just feeling very anxious that day and he thought maybe he'd take one more? I mean, it happens with people everywhere on the planet. It doesn't make him a bad guy."

Nikki went on to say that he feels especially sorry for Chris's family, which has had to live through this unthinkable tragedy. "I do every day think about his wife and the kids, and I guess in a kind of a morbid way, I looked up Chris and family [online], and I saw these beautiful pictures of him with his wife and him being a dad, just being a guy, being a… dad, you know," Sixx said.

"We're not rock stars when we have kids. We're dads. We're just guys. We get on our knees, we make funny faces, we do romantic things for our wives."

In addition to SOUNDGARDEN, Cornell sang with AUDIOSLAVE and TEMPLE OF THE DOG, while also recording four solo studio albums and one live set on his own.

His funeral took place last Friday (May 26) at the Forever Hollywood cemetery in Los Angeles, attended by bandmates, fellow musicians and actors such as Brad Pitt and Josh Brolin that he had befriended.