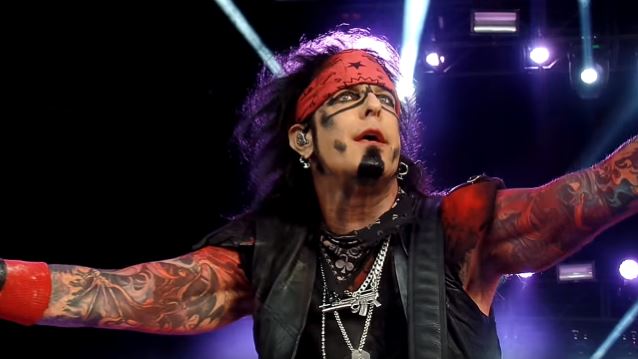 According to TMZ, Nikki Sixx is in talks with "American Idol" about joining the judges panel. The producers of the singing competition show and ABC want the MÖTLEY CRÜE and SIXX:A.M. bassist as the third judge on the rebooted program, which will be hosted by Ryan Seacrest.

ABC has already locked in Katy Perry as one of the new "Idol" judges, with Lionel Richie also said to be in talks to join the revived former Fox hit show.

"American Idol" went off the air just a year ago because of falling ratings.

Sixx said earlier this week that he was "unofficially retired" from touring, less than three months after undergoing hip replacement surgery. In a post on his official Facebook page, Sixx wrote: "For those of you asking, I've been playing in bands and touring the world for 40 years. I have no immediate tour plans unless I get a wild hair up my ass or something or somebody really inspirational comes along."

He added: "Since I've been home, I've just been writing music non-stop, recording with other artists, taking vocal, bass and guitar lessons and focusing on photography. Money has never been and isn't a driving force for me. Let the chips fall where they fall. So I guess I'm unofficially retired or maybe just expired at this time."

Sixx added that it was "nice to give 100 percent of my time to my wife and kids."

He did indicate that he has two new SIXX:A.M. albums in the works, as well as two books, an adaptation of the MÖTLEY CRÜE memoir "The Dirt" for Netflix and a stage version of his own autobiography, "The Heroin Diaries".

Sixx underwent a two-hour hip replacement procedure in early April, adding that the bone that was removed "was complete mush."

Sixx toured with MÖTLEY CRÜE one last time in 2015, with the band performing a total of 164 shows to close out its career.

The past few years, he has focused on SIXX:A.M., which initially started as a musical offshoot of "The Heroin Diaries" but turned into an actual band. Its latest albums, "Prayers For The Blessed" and "Prayers For The Damned", came out in 2016.