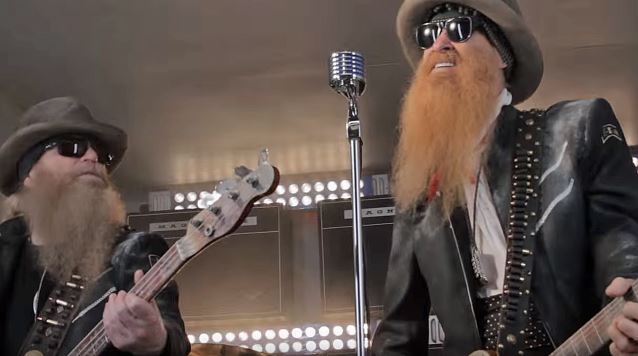 Banger Films, in association with Eagle Rock Entertainment, is set to produce the first-ever feature length documentary exploring the fascinating, mysterious tale of Texas band ZZ TOP. The filmmakers, Scot McFadyen and Sam Dunn, are calling out to fans for help finding rare photos, videos, and audio to tell the story.

“We're big admirers of ZZ TOP, so we're thrilled to be working on this film. ZZ TOP is rock's longest-standing power trio and have influenced legions of rock, pop and country artists, but there's very little archival material documenting this band's past. So we need their fans to help us out!" says Dunn.

ZZ TOP's Billy F Gibbons noted: "We're excited that Banger Films have undertaken the challenge setting the ZZ TOP story into motion. The band is enthusiastic about the effort. Yes, it's going to be a fact-based documentary yet considering the subject matter, we expect there to be a continuing element of the band's infamous surrealism."

ZZ TOP — guitarist Gibbons, Dusty Hill on bass and drummer Frank Beard — ascended the rock ladder through a combination of infectious boogie-blues riffs, restless experimentation, and blistering live shows to become one of the most celebrated and successful bands of all time. And yet for many music fans they remain a mystery. In the 1980s, when the group was at the top of the MTV heap, with fur-lined guitars, foot-long beards, a bevy of babes, and selling upwards of twenty million records, they remained shrouded in a gumbo of conjecture, folklore, and downright leg pulling. As 2016 dawns, with the band still beloved by fans and musicians alike, ZZ TOP's story remains untold — until now.

Leveraging on Banger Films' own trailblazing documentaries, "Rush: Beyond The Lighted Stage" and "Super Duper Alice Cooper", the yet-to-be-titled ZZ TOP documentary will be an unblinkered, uninhibited film featuring the band, their friends and intimates — stuffed with unseen footage and photos and never-before-heard audio tracks, detailing the band's history. Viewers will witness the extraordinary story of three friends, each musical purists and master bluesmen on a lifelong mission to show music lovers a Texas-style good time.

As Banger FIlms digs deep into the vaults, the filmmakers are calling on fans to do the same by giving fans and collectors alike the opportunity to send descriptions of their ZZ TOP footage, photos and audio to: zzfans@bangerfilms.com with the subject "ZZ Top Fan Submission."