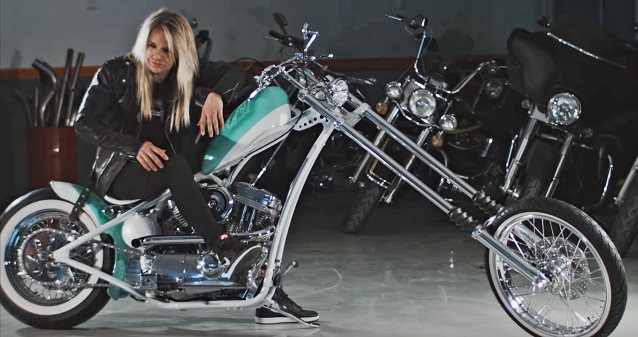 Olli Herman has been dreaming about two things when he was a kid: becoming a rock star and owning and riding a custom built Harley-Davidson chopper. As frontman of glam rock band RECKLESS LOVE, the 34-year-old already enjoys rock-star status in his native Finland. With Penelope, his dream of owning a custom Harley-Davidson now becomes reality too.

Harley-Davidson, Harley-Davidson Tampere and Olli Herman are proud to present the result of a project that has been in the works for a year. Penelope turned out to be a beautiful chopper that truly represents Olli's personality: flamboyant, good looking and wild!

"I always wanted a Harley-Davidson," says Olli. "All my idols rode Harleys. From Billy Idol to David Lee Roth, and from the guys of MÖTLEY CRÜE to Blackie Lawless of W.A.S.P. and Rob Halford of JUDAS PRIEST. It was a vital part of the image of becoming a rock star. The thing that finally sealed the deal for me was the sound. Once I heard a Harley for the first time in real life, I was completely infatuated with Harley. I knew that one day I had to own one."

He continues: "My vision has always been to ride a chopper. More precisely, a long slender and narrow one. I don't exactly know why I came to think of choppers instead of any other type of custom bikes. To me, it feels natural as I always tend to steer towards the more flashy and extravagant designs. For me, choppers with long front ends have always been the most eye-catching things to roam the roads. To me, riding a Harley-Davidson is the best thing you can do with your pants on!"

The Penelope project started a year ago when Olli visited Harley-Davidson Tampere. There he started discussing his ideas for building a custom bike with Mika Nieminen (owner H-D Tampere) and Jussi Lindgren (mechanic H-D Tampere). Olli says: "Harley-Davidson Tampere's style of designing Harleys matches my taste. Penelope's body has got that airy and light quality I was always looking for. All in all, Jussi hit the mark perfectly, or actually even better than that. Penelope is more beautiful than I could have ever expected and she is an absolute pleasure to ride."

Jussi Lindgren from Harley-Davidson Tampere adds: "The project started with a heavily abused Sportster model. Our vision was to bring it back to life as a long beautiful chopper. Harley-Davidson Turku helped us revising the engine. Then we listened to Olli's input and wishes. Next to that, we threw in our own ideas. We have a long history of building bikes, so we know what we're doing. I believe the end result is truly excellent. Penelope turned out to be a graceful chopper that not only looks good, but also rides and steers amazingly. During the building process, I got to know Olli. He is a great personality. It was a pleasure to build him a true chopper. I believe he is a satisfied customer!"

"In the motorbike scene, it's quite common to give a custom motorcycle a name. Olli chose the name Penelope. It comes from Greek mythology. Penelope was Odysseus's wife. She was known for her fidelity, cleverness, strength, warmth and intelligence. Olli's bike reflects these values! We wish Olli a lot of fun on the open road. I am pretty sure Penelope will turn some heads!"

Check out the video about Penelope below.