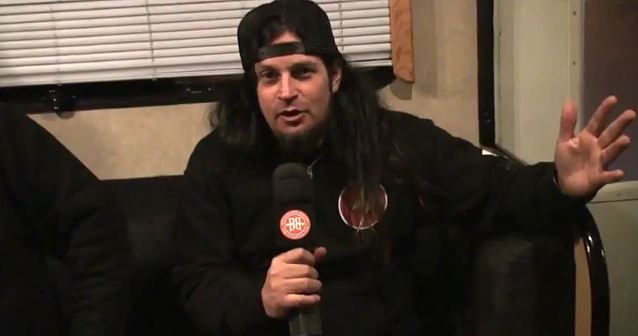 Groovey of Groovey.TV conducted an interview with SNOT and CHANNEL ZERO guitarist Mikey Doling. You can now watch the chat below.

SNOT originally disbanded in 1998 following the death of singer Lynn Strait, putting an end to a career that generated considerable promise but only one studio album, the 1997 Geffen Records release "Get Some".

Asked about the possibility of new SNOT music in the not-too-distant future, Doling told Groovey.TV: "We know we can write songs together, 'cause even when we just goof off at soundcheck or whatever, we come up with stuff — instantly, just goffing off. And we have the same taste in music. We put on PORCUPINE TREE and FAITH NO MORE, we put on BLACK FLAG, BLACK SABBATH, PANTERA… We love the same stuff at the same time. So we know we could do a record. But doing it without Lynn Strait, it's a bit of a stretch. So we don't know how we're gonna achieve the goal of making new music, even though we'd like to. So the answer is, maybe. I don't know. We'd like to. But we don't know where that wall is and that barrier, and if we're allowed to even do it without Lynn and call ourselves SNOT. So… We'll see, man. If it feels right… We'll see."

Regarding SNOT's decision to go back on the road, Doling told the Wisconsin radio station 107.5 The Rock: "We've been friends ever since the old days, 20 years ago. And the reason SNOT stopped is our singer [Lynn Strait] passed away in a car accident. So we stopped, but we have remained friends for many years — I mean, through the whole time — like, we're the closest of bros. And we just we wanted to jam together again, as friends, and that's just what it comes down to. We've got something cool, we have a band called SNOT, and we have a great legacy with a killer record, 'Get Some', and we were, like, you know what?! Why shouldn't we go out and rock, man? And it turns out people wanna see it, and they wanna hear the songs live, and we're gonna do that, with all due respect to Lynn, of course."

On the topic of whether it was hard to find a singer to replace singer Lynn Strait, who died in December 1998, Doling said: "You know what?! Well… I don't wanna say 'hard.' There's nobody that could replace Lynn, so there's no replacement. But I've got a good friend of mine, who's a great singer and he loves SNOT, and he's a good pal. So it's more, like, 'Hey, man, you wanna sing for us?' We didn't really go looking around nationally or putting out any kind of search or anything like that. I've got a good friend, he's in a great band and he's a great singer, so I just called him and asked him, and he said, 'Sure.'"

SNOT's U.S. tour, during which the band is performing its classic "Get Some" album in its entirety, kicked off on November 28 in Palm Desert, California and wrapped up on December 23 in Pomona, California.