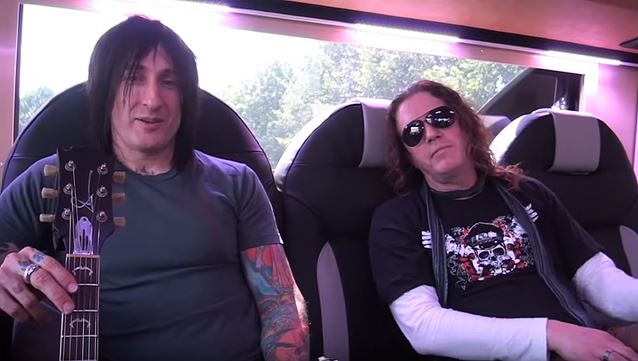 Guitarist Richard Fortus and keyboardist Dizzy Reed have left THE DEAD DAISIES, leading to speculation that they will be part of the reunited GUNS N' ROSES lineup.

Lowy says: "It's been a privilege and a pleasure to write, record and perform with such talented world-class musicians and all-around great guys. I've personally learned so much from both of them.

"We're very excited to announce Doug Aldrich will be joining THE DEAD DAISIES in the lead guitar role. Doug was Richard's first pick to replace him. He's a highly accomplished musician, performer and songwriter and we're really looking forward to Doug joining us as THE DEAD DAISIES adventure rolls on."

Aldrich says: "I'm very, very happy to join my friends Marco, Brian, John and David in the next chapter of THE DEAD DAISIES. I love the band and I'm looking forward to getting busy on the new record.

"This band is bringing back a raw, back to the bones sound that a lot of groups go for but THE DEAD DAISIES are looking to nail. At this point in time, we are looking to have a kick-ass rock 'n roll album in the can by spring 2016."

Fortus adds: "When we started speaking about finding someone to replace me, the first suggestion I had was Doug Aldrich. It doesn't get any better than Doug in my book. I am so happy that he is able and willing to step in and take over. I think that it will elevate the band to the next level.

"Thanks to everyone that has supported the DAISIES over the last couple of years. Stay tuned to see what they come up with next. I'm sure you won't be disappointed."

GUNS N' ROSES has announced four headlining performances in April, with Axl Rose, Slash and Duff McKagan the only members confirmed so far.

The rest of the lineup for the shows — and a potential tour later in the year — remains unclear, although keyboardist Chris Pitman, Reed, drummer Frank Ferrer and Fortus are all believed to be involved.

The status of original members Izzy Stradlin and Steven Adler remains unknown, along with that of "Use Your Illusion"-era drummer Matt Sorum.