Former MARILYN MANSON and current ROB ZOMBIE guitarist John 5 will release a new album, "Season Of The Witch", on March 3, 2017.

The disc — the first to be billed as a JOHN 5 AND THE CREATURES album — will coincide with the brand new CREATURES tour starting on March 3 in Seattle.

A teaser clip for "Season Of The Witch", directed by Josh Hasty — who, as Rob Zombie and John 5 fans are aware, directed the recent "In Hell Everybody Loves Popcorn" behind-the-scenes making-of documentary for Zombie's movie "31" — is available below.

John 5 recently told Reverb about his solo performances: "It's completely instrumental, and it's really fun. We play all different styles of music: Western swing, Spanish-style flamenco, heavy stuff. So it's cool because you never know what style is going to come next."

John has had an illustrious career collaborating with chart-topping artists such as LYNYRD SKYNYRD, Ricky Martin, and Rod Stewart. John has performed on critically acclaimed world tours with Marilyn Manson and Rob Zombie. Later, John ventured into the world of film score composing for Rob Zombie's "The Lords Of Salem". In 2004 he branched out into a successful solo career and has since released eight studio albums. 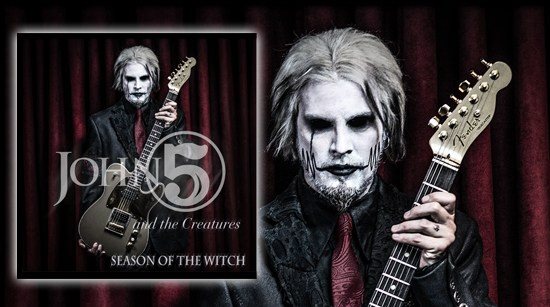