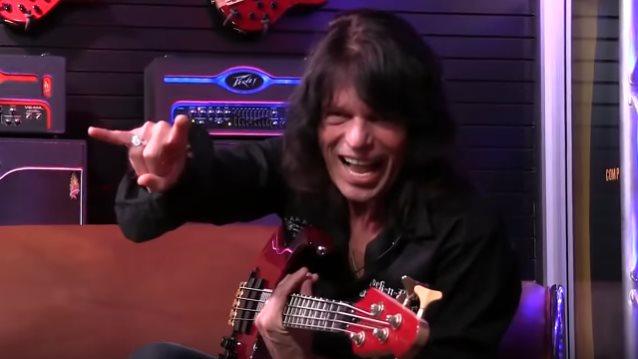 Legendary bassist Rudy Sarzo (QUIET RIOT, OZZY OSBOURNE, WHITESNAKE, DIO) was interviewed on a recent episode of "Cover Your Ears", the podcast hosted by Brian Geller, the lead singer of the ATOMIC PUNKS. You can now listen to the chat below.

Asked what the first thing is that comes to mind when someone mentions Ronnie James Dio's name, Sarzo said: "The first is hard to put it into words, because it would be a combination of what made Ronnie so magical. It was his kindness, humble[ness] and ferocity and talent. So many things, 'cause we're talking about a multi-dimensional performer [and] human being."

He continued: "When I first joined [DIO] in 2004, I'd already been around for over twenty years and I thought, 'Wow…' I'd experienced just about everything, and playing with Ronnie was a whole new set of information; I learned so much from him. Especially at a time when a lot of bands had stopped creating music because of piracy and everything else, Ronnie never stopped writing, composing on his own. He had a project studio at his house, and I kind of taught him the fundamentals of Pro Tools, and he picked it up so quick — within a week, he was up and running all by himself, recording everything.

Sarzo added: "Ronnie was the most musically trained singer I've ever worked with, 'cause he started out as a concert trumpet player. He wanted to be… back in the… a long time ago, in the early '60s, a concert trumpet player. And then he started playing rock and roll. As a matter of fact, he toured… Dick Clark's Caravan [Of Stars], where he was, like, in the backing band with artists like Dionne Warwick and Gene Pitney… whatever were the Top 10 artists of the day. Dick Clark used to put those tours on the road in a big old Greyhound bus where everybody sat on the bus and then went to a hotel and you did about six or eight shows a day. Everybody sang their hits. That was basically his musical background. Then he became a bass player in ELF. He had RONNIE [DIO] AND THE PROPHETS. But he was always a musician. And then he became a lead singer. And he was an English major, so writing was so natural for him, as a poet [and] as a composer. As a matter of fact, when he passed away, he was finishing his book, his memoir, by hand — no typewriter, no laptop; writing longhand. Yeah, [it was] amazing."

Since the early 1980s, Sarzo has played with some of the biggest bands and artists in hard rock and heavy metal, including OZZY OSBOURNE (alongside renowned guitarist Randy Rhoads), QUIET RIOT, WHITESNAKE, DIO and Geoff Tate's version of QUEENSRŸCHE, not to mention a five-year stint with hard rock juggernauts BLUE ÖYSTER CULT.

Sarzo in 2006 published "Off The Rails", a book about his time with Osbourne and Rhoads.