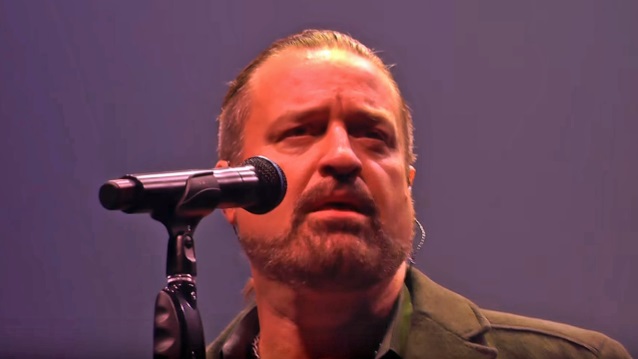 Russell Allen has spoken out about the road accident he was involved in last July that resulted in the death of his ADRENALINE MOB and TRANS-SIBERIAN ORCHESTRA bandmate, bass player David Zablidowsky.

The singer, who is also a member of SYMPHONY X, says that TSO's recent winter tour saw him feeling "more free" than ever before to express himself. "The stage has been the safest place on earth for me, man," Allen told Brad Parmerter in an extensive new interview. "I feel at home up there, more than I've ever been so that's really where it's at. I step out on stage and whatever things that are coming out of my mouth are right from my heart. There's no filter. I'm not thinking, 'Oh, this is gonna be cool?' You know what I'm saying? I think that's what you're seeing — a man who has been through hell and back. I'm just up there loving life and showing my love for the crowd through these songs. That's the best way I can explain it."

Allen added that he felt "way more trepidation" before the latest TRANS-SIBERIAN ORCHESTRA trek than he did leading up to his previous tours with the combination progressive rock band and orchestra. "I almost didn't come," he admitted. "I was very apprehensive. It was just a lot, it was very hard for me. Losing Dave was really hard on all of us, especially...I was there, you know. And having to go through all that this summer was really rough — rough on me and my family and having to come here and see... and go through all that again, you know, but even more so. Seeing people who he was with for 17 years, you know. I had known Dave for a long time 'cause he actually, him and his brother Paulie, opened up for SYMPHONY X years and years and years ago.

"I didn't know if I was gonna come back," Russell continued. "But my therapist and my doctors were saying, 'This is a good thing for you. You need to go and do this and confront this and go out on this tour and stuff.' 'Cause, you know, just getting on the bus was a bit of a deal, an ordeal for me, man. I was just scared man, I was just... The first night, couple of nights on this thing, I just couldn't sleep. And the pyro was a big trigger for me and having to go through a lot of that stuff, you know, it was all baby steps and I got through it. Everybody [on the tour] is just so awesome and so lovely and nice and I realized that I was surrounded by a lot of love and stuff, but it was hard. I'm so glad that I did it. I'm happy that I'm here to, to be here for everyone else too. But it was tough leaving my kids and my wife and stuff after almost losing everything, you know, just my life, so it's been, it's been a journey the past six months, to say the least."

Read Brad Parmerter's entire interview with Allen at this location.

Zablidowsky's death wasn't the only blow the TRANS-SIBERIAN ORCHESTRA family was struck with in the past year. In April 2017, the project's founder, composer, and producer Paul O'Neill died of an accidental overdose.

The ADRENALINE MOB accident occurred near Micanopy, Florida when a tractor-trailer veered off Interstate 75 and struck the group's RV, which had pulled off the highway with a flat tire. ADRENALINE MOB was traveling in the RV and a van that was pulling a covered trailer.

SYMPHONY X bassist Mike LePond said in a recent interview that the band is tentatively scheduled to regroup next month to begin work on material for the follow-up to 2015's "Underworld" album.