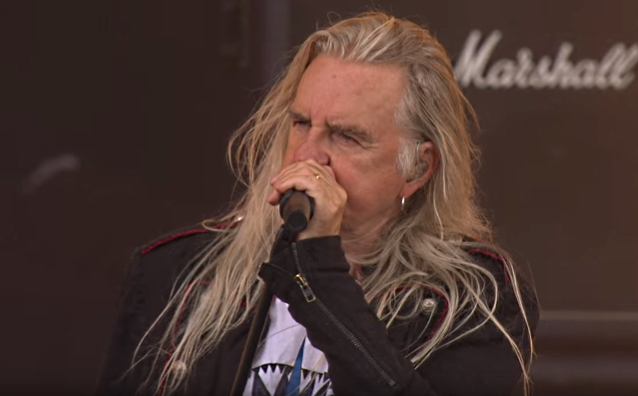 A heart bypass surgery, or coronary artery bypass graft (CABG) surgery, is used to improve blood flow to the heart. A surgeon uses blood vessels taken from another area of the body to bypass the damaged arteries.

Earlier today (September 28), Biff took to social media to offer an update on his health status. He shared a photo of his breakfast, along with the following message: "Hi a cup of tea and jam and roast. T minus 5 days since operation. I'd like to thank all of you who sent love and well wishes and tons of positive vibes to me. I had an emergency triple bi pass operation on Monday morning. I'll be feeling tired for a while. A lot of pain management at the moment but I'm up and about for a bit everyday now. It's more shuffling than walking but hey never surrender and all that. I'd like to thank the tremendous team at york training hospital and Hul..."

SAXON was forced to postpone all its previously announced 2019 shows so that Byford could undergo the procedure. His post-op recovery period will last into 2020.

Byford and guitarist Paul Quinn are the sole remaining original members in the group's current lineup, which issued its 22nd LP, "Thunderbolt", in February 2018.

Originally from South Yorkshire, England, SAXON has gone on to sell about 23 million albums and has produced such classic songs as "Denim And Leather", "Princess Of The Night", "Wheels Of Steel" and "Power And Glory".

Hi a cup of tea and jam and roast
T minus 5 days since operation
I’d like to thank all of you who sent love and well...

Posted by The Real Biff Byford on Saturday, September 28, 2019