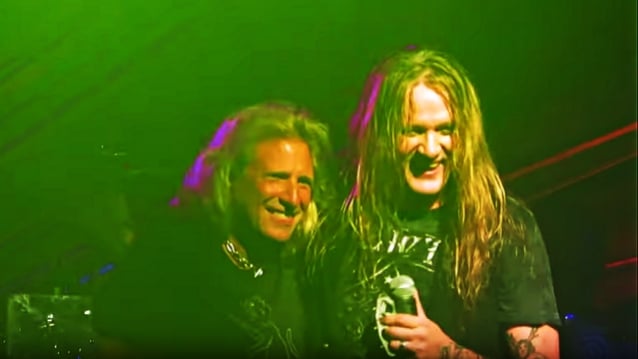 A short time after the concert, Affuso took to social media to write: "Great to be 'Back in the saddle!'"

Affuso — who left SKID ROW in 1998 and claims to be "the only former member that keeps in contact with all former SKID ROW bandmates and is still good friends with them all" — previously reunited with Bach to perform classic SKID ROW songs on at least two occasions — a 2011 show in Poughkeepsie, New York where Affuso played "I Remember You", and a 2016 show in the same city where he played "Rattlesnake Shake".

In June, Bach issued an "open invitation" to the other members of SKID ROW's classic lineup to "get onstage and jam" during the vocalist's current tour. A few days later, during an interview with Finland's Kaaos TV, guitarist Dave "Snake" Sabo confirmed that he would not accept Bach's latest overture. "I'm working with my band," he said. "This is SKID ROW, and this is what I do."

Asked by Rolling Stone if he thinks his former bandmates are offended that he put his invitation out there publicly, Bach said: "No. I think it's an ego thing. They don't like when I get attention, and they don't get attention. It's always been like that. I can already see them getting mad, because I'm selling out shows, and they're not part of the show, and blah, blah, blah."

Bach parted ways with SKID ROW in 1996. Three years later, the group resurfaced with vocalist Johnny Solinger, who fronted the band until 2015. After an eight-month stint with former TNT vocalist Tony Harnell — who Bolan said last year was a "really bad match" that "just didn't fit" — SKID ROW recruited former DRAGONFORCE vocalist ZP Theart, who has toured with the group for the past three and a half years.

Bach recently told PopCulture.com that the classic lineup of SKID ROW's "almost" reunited last year. "It didn't happen for business reasons, I would say," he explained. "But we're all alive — that's all I can say. And it would be fun. Everybody would love that. They would love that."

Pressed about whether it's "nostalgic" for him to be playing SKID ROW's debut album in its entirety, Bach said: "Well, it certainly is, because it was 30 years ago. I don't have any problems with that. We do a lot of these songs in our set anyways, but there are three or four that we never, ever, ever do. And I guess the fans like the novelty of, like, when they put a CD in their car, or when they listen to it on their phone, the album, they like to have that happen live in their face. But it's a new thing for me to do an album in its entirety. And there are songs on here that I wouldn't do — like, I'm not gonna do these next tour. Well, I don't know about that. 'Cause I don't do things just for money, but if the money's right, I might think about it. [Laughs]"

Asked if it feels different for him to play the early SKID ROW songs without the other members of the band's classic lineup, Sebastian said: "Not for me, it's not. The only thing I would say that is different is that SKID ROW was a two-guitar band. In my band, it's one guitar. Sometimes it's too loud for me. I'm just being honest. If it's too loud for me, I can't really sing as good as I can. It's gotta be at a controlled volume."